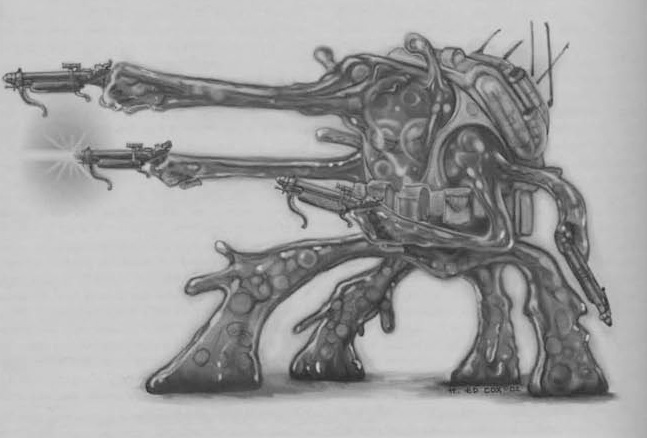 Most Imperial citizens consider the various slimes and oozes found on so many worlds to be a simple (if sometimes deadly) threat to be avoided or exterminated. The ulb are anything but. Less common than many of the other races, the ulb flourish on hot, humid worlds. Even after they were discovered, it took several hundred years before anyone realized that they were an intelligent race, much less that they were an extremely pious race that worshipped aspects of the Unification gods.

Until recently, most citizens had never seen an ulb, except possibly in the largest of the Unification churches, and even then, they probably had no idea what exactly they were looking at. Most ulb have been content to either stay on their homeworlds or else join ships crewed entirely by their own kind. Given the damp, thickly smelling environments that they prefer, this was probably for the best for all concerned. However, with the long feared crowning of an Asamet emperor, the ulb have been increasingly active, making allies and earning favors to prepare for the dark times ahead that they claim were foretold by their prophets 6,000 years ago.

Personality: The thought processes of the ulb are unusual. They have a strong sense of community and family – they often band together in large groups based on shared ancestry. They believe in immortality through the actions of their children, who they see as an extension of themselves. Combined with their very long lifespan, this leads them to a relaxed, unhurried lifestyle in which the greater good is to serve the race as a whole. This is tinged by their strong religious beliefs. Having taken up a religion similar to the Unification doctrine even before encountering the Empire, they view humanoid clerics in much the same light as humanoids of the church view them – proof of the power of their gods. Or, as the ulb say, “It is amazing and wonderful that creatures so different from ourselves can still be inspired by the divinity of the same gods.” Unlike many races, the ulb revere all of the Twelve equally and openly. Each has a place in their culture, and while the Reaper and Destroyer are frightening in their wrath, the faithful know that ulb clerics devoted to these powers exist to turn that fury on those who would threaten the survival of their race.

While almost identical to each other physically, the ulb vary widely in outlook. They are roughly evenly distributed in terms of alignment, but even evil ulb will prey on non-ulb before turning on their own. Ulb also place great importance on age, according respect to their elders. Unfortunately most races do no live long enough to be counted as elders among the ulb, and those that do (elves and dragons) are generally not well liked by them because of their elitist views. Still, they are attentive to the voice of experience, and work well in groups once someone has proven their skills to the ulb in a crisis.

Physical Description: The ulb are large amorphous creatures, averaging 4 feet in diameter when mature. They are amorphous – able to adjust their shape at will by extending tentacle-like pseudopods to act as arms or legs. In any shape they are partially translucent, filled with a pale blue liquid and numerous greenish spheres. These spheres act like internal organs do in other creatures, containing structures that process food, filter out waste, and carry out the ulb’s thought processes. These distributed “organelles” make ulb amazingly resistant to some types of harm, while their thick, rubbery skins and fluid interiors leave them at great risk from other attacks. They can eat a wide variety of organic material including meat, vegetables, raw grains, etc., and must consume as much as a human.

Ulb do not have distinct genders. Instead, they reproduce by budding. This takes a considerable amount of extra food intake and about two months of concentration on the part of the ulb. Afterwards, a miniature ulb 8 to 10 inches in diameter separates from the parent. Ulb have strong parental instincts and will protect and raise their offspring for the 10 years it takes the bud to reach adolescence, when it will be roughly 3 feet in diameter. Ulb live for up to 300 years if they can avoid injury and radiation poisoning, which accelerates their aging process. As ulb grow older, their fluids and organelles become washed out, shifting from blues and greens to a milkier appearance. Ulb vision is fairly primitive, consisting of specialized eyespots on stalks. This provides poor color vision, and ulb are chronically nearsighted. However, large patches of the ulb’s skin instead act as both ears and speakers, able to detect and produce vibration. This allows ulb to mimic speech despite having no lungs or vocal cords. An ulb’s ability to detect vibration (analogous to “hearing” for most races) is quite good, and some individuals have honed this to remarkable levels, becoming able to detect other creatures in their vicinity with ease.

Despite some rumors to the contrary, ulb cannot extract oxygen from water through their membranes and can drown as easily as any other air-breathing creature. They can, however, trap bubbles of air within their bodies, extending the time they can survive underwater. Without such preparation, they can “hold their breath” only about as long as other non-aquatic races.

Relations: Ulb that have ventured off their homeworlds find the company of humanoids fascinating, since other oozes leave much to be desired in terms of conversation. In spite of this, they have never been welcomed or treated favorably by the rulers of the Dragon Empire, and only see this situation growing worse with a red dragon upon the throne. All inroads they have made with galactic society have been through the Unification Church. That the Unification deities have seen fit to grant the prayers of ulb clerics is their strongest argument for equality on worlds largely dominated by humanoids. While they get along cordially with most races, they often find themselves at odds with the elves. Ulb believe elves to be narrow-minded in their views of natural ecology, disregarding the slime and fungal ecosystems that dominate the ulb homeworlds. With both sides possessing tremendously long life spans, this has degenerated into long-winded debates that have lasted longer than most other races’ life spans.

Ulb find the idea of humanoid soulmechs somewhat puzzling. They appreciate the desire to preserve the experience of individuals through technology, but have difficulty relating to a soulmech as a living being – since obviously they are not. Unless an ulb has worked with a particular soulmech for several years, they are likely to treat the automata as a sort of clever, automated library of the recorded personality’s thoughts. Only by seeing a soulmech grow over the course of years is this impression likely to change, no matter how often the “clever program” protests otherwise. Due to the radical difference in body types, no ulb has chosen to undergo the procedure themselves, equating existence in such a fixed form to be the equivalent of constant torture. Madness seems to be the most likely outcome of any such attempt.

Alignment: Ulb can be of any alignment, having no strong preference for any of them.

Ulb Lands: Ulb prefer damp climates and can adapt to most worlds so long as they avoid deserts. They are most frequently found on worlds that are dominated by fungal ecosystems, and as such rarely have had to share their worlds with humanoid races. In the last two centuries, the ulb have begun looking into developing vacuum-resistant fungal technologies like the living ships of the elves so that they can create self-growing colonies on moons or even large asteroids with sufficient water or ice. Acquiring new territory has become one of the race’s highest priorities since the crowning of Mezzenbone.

Religion: Ulb are amongst the most pious of the Empire’s races. Virtually every ulb at least acknowledges one of the Unification deities as its preferred deity, and many make this preference widely known. Ulb hold clerics of all sorts in high regard, and will go out of their way to be courteous to such individuals.

Language: The ulb language is simply impossible for most other creatures to master – it would require the vocal range of a dolphin, a tuba, a tenor opera singer and about 200 wind chimes combined. While melodious and even soothing, none of the major humanoid races can speak it without the aid of a translator. On the other hand, some individuals can understand it unaided, much to the surprise of any Ulb whose “private” conversations are overheard and understood. With portions of their bodies acting much like electronic speakers, ulb do not share this difficulty in speaking the languages of other races. Indeed, some ulb have become famous as linguists, diplomats, and impersonation artists. A bardic ulb is an amazing performer, able to both sing and accompany itself with several reproduced musical instruments.

Names: As ulb names are nonsensical in humanoid terms, they always adopt nicknames from the language of whatever race they deal with most.

Adventurers: Ulb have become increasingly active in recent years, and are now found among many groups of adventurers, adding the flexibility of their unique abilities to the strengths of others. With their strong sense of community, such ulb adventurers rarely operate alone, and can be essential in smoothing over the differences between their humanoid teammates. After all if they can work successfully with a 4-foot-tall ball of ooze, their own difference can hardly be unsolvable!