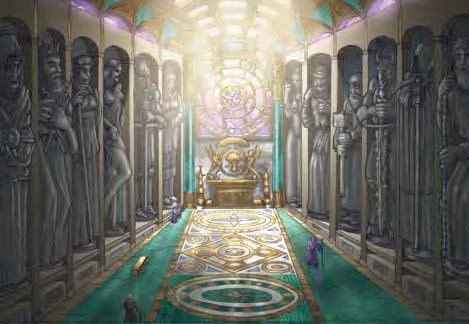 The Unification Church was established in 876 AE by the prophet Nasuit in the holy city of Aani on the planet Maira. The church rose to prominence during an age in which regular contact and trade between worlds was increasing at a dramatic rate. Qesemet and Asamet had risen to dominate the old Star League, and unification under common causes and banners was the order of the day. In this cultural environment, the Unification Church gained immediate recognition and acceptance. Under its spreading influence, a traveler could find fellow worshippers and a temple to his god no matter where he went. With a shared religion, the Star League finally felt like a single, unified civilization. The symbol of the Unification Church is a stylized spiral galaxy, with each of the twelve spiral arms representing one of the deitypes. In the years leading up to the great war, this became a more recognized symbol in the known galaxy than the flag of the Star League.

Aani remains the religious capital of the Empire, and its ancient temples are still the spiritual and administrative heart of the Unification Church. In its early years, the church was closely aligned with Qesemet, and the Raza system of technically lies within the Domain of Deserene. However, the entire system was declared an independent protectorate of both kingdoms before the war, and that tradition is honored to this day.

Orthodox clerics of the Unification Church believe that the thousands and thousands of deities worshipped in the known galaxy are cultural aspects of the Twelve – the deitypes of the Great Pantheon. According to the strict interpretation of doctrine, this means that there is no inherent difference between the Father worshipped by the elves on Aisa and the Father worshipped by the dwarves on Khamar. The only differences are cultural artifacts imposed by the worshippers themselves throughout the centuries or millennia in which their cultures have developed.

Progressive clerics, on the other hand, believe that the gods themselves are not simple, one-dimensional beings, but rather complex, multidimensional entities. To the progressives, it makes no sense to say that the different aspects of the deitypes are not real – they are each as real as anything in the universe, and they are nevertheless all unified into a divine totality; the deitypes recognized by the Unification Church. While sometimes difficult to comprehend, this progressive theology has gained greater acceptance for its inclusiveness and respect for traditional religious practices.

This doctrinal schism has usually remained peaceful and scholarly, but it did lead to a more dramatic one, the Dualist Heresy.