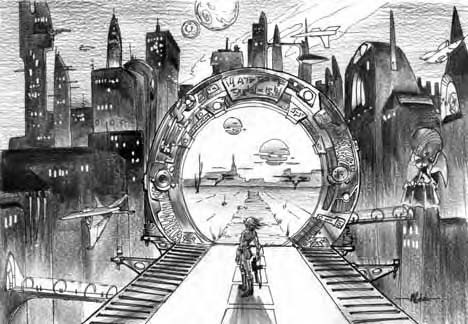 The Long Road is an interstellar superhighway that links each of the 10 throneworlds by means of a series of teleportation portals. This highway serves as the main commercial artery for the whole Empire. The Long Road is 20 lanes wide and runs for about 10 miles on each of the throneworlds. Massive commercial, industrial, and distribution facilities crowd both sides of the highway all along its length. Using the Long Road to transport both cargo and passengers is vastly more efficient than starships, so the throneworlds serve as the commercial and distribution hubs of the Empire. Rather than transport a shipment of darkwood across the Empire from the Canatar system to the Harbor system, a merchant or corporation can instead send the shipment by starship to Andragus, down the Long Road to the throneworld of the Casenore system by hovercraft or maglev train, and from Casenore to Harbor by starship. In many cases, the Long Road cuts millions of credits off the price tag of cargo and passenger transport. This immense increase in efficiency makes interstellar trade in the Dragon Empire financially viable.