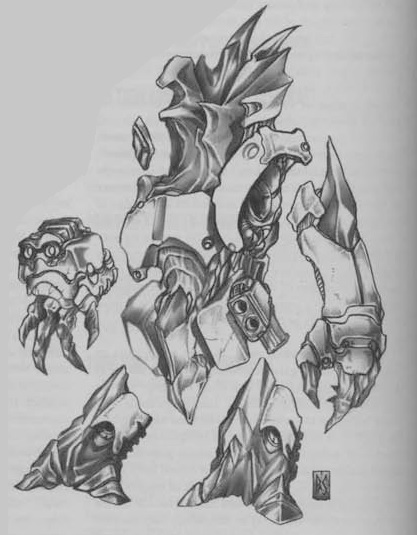 Not Currently A PC Race

Among the most ancient races within the Dragon Empire are the mysterious tarn idoun. These beings of living crystal are the first creators of the ioun stones. Most have dedicated themselves to the studies of magic and technology and pursue knowledge in all its forms.
The exact origins of the tarn idoun appear to be lost to history. The first recorded contact with the race tells of a dwarven mining expedition that found rows of strange crystal shapes within an asteroid they had sought to mine. Floating around these crystalline forms were smaller crystals of various colors. When the dwarves touched them, the crystalline forms sprang to life and identified themselves as the tarn idoun. Other races encountered similar communities throughout the galaxy, sometimes on a moon and other times buried deep within a planet. The tarn idoun seemed to have no memory of life before being awakened and had no knowledge of how they had come to be found dormant in the caverns. The tarn idoun adapted quickly to life among the sentient races. They employed their innate magical energies to allow their crystalline forms to interact with the technology and devices of the sentient races. The presence of the tarn idoun’s arcane essence leads many to believe that the tarn idoun or their precursors are extraplanar in origin.

Within a few hundred years, the tarn idoun were an integral part of the galactic community. Their ability to make ioun stones led many tarn idoun to engage in trade and commerce with other races. Tarn idoun made welcome additions to survey and exploration teams where their attention to detail resulted in comprehensive starcharts and voluminous data on various planetary and stellar phenomena. Many tarn idoun turned their attention towards magic, creating new forms of magical protections and propulsion. The tarn idoun’s natural talents in magic and the vast array of technology they encountered made the practice of technomancy a natural choice for many. To this day, the tarn idoun remain a prominent part of the interstellar community and several of the galaxy’s greatest technomancers are drawn from this race.

Some believe the terms of the Dragon Pact hold the key to explaining the unusual behavior of the tarn idoun during the years that preceded the Dragon Wars. Just prior to the founding of Quesemet on Scion III, hundreds of thousands of tarn idoun, including those that allegedly forged the Dragon Pact, vanished, seemingly overnight in an event now known as the “Ioun Exodus.” Whether they left for another area of space or were slaughtered in secret, no one, including the remaining tarn idoun know. What is known is that the dragons and their kin still afford considerable latitude to the tarn idoun. When the Dragon War broke out the tarn idoun were one of the few races to remain truly neutral in the conflict. However, many of their crystalline cities and monuments, largely abandoned, were destroyed in the ensuing conflict.

Personality: Tarn idoun are inquisitive and methodical beings. Their work, whether researching spells or crafting firearms, is detailed and precise. To a tarn idoun magic and technology are relatively interchangeable – one merely a different form of the other. They are often controlled and guarded in social situations. Generally passive, tarn idoun are slow to anger. An irate member of the species is a rare and horrifying sight. Fortunately, tarn idoun display little passion for things outside of their chosen field of study except for challenging puzzles or riddles. They are gender neutral and reproduce asexually, a trait that most sentient races find unusual. Tarn idoun seem to have little comprehension of the concept of humor, at least as other races consider it. Often a tarn idoun will engage in behavior that other races find amusing, though the tarn idoun is often oblivious to its comedic value. However, there have been some instances in which a tarn idoun appears to be displaying a sense of humor – albeit a peculiar one. Companionship does not come easily to tarn idoun. However, once forged, the bonds of friendship are strong between a tarn idoun and its comrade. Only a tarn idoun’s most trusted allies are freely given an ioun stone. Such a gift is a symbol of a deep trust between the tarn idoun and its companions. A companion of a tarn idoun that displays his ioun stone is welcomed in nearly every tarn idoun community as the ioun stone is a symbol to the tarn idoun that the companion is worthy of respect. The ioun stones are vessels of life force for a tarn idoun. They are objects to be cherished and revered. Even ioun stones obtained from other sources are closely guarded by a tarn idoun.

Physical Description: The bodies of the tarn idoun are composed of living crystal. They are vaguely humanoid in shape, but lack any discernible facial features. Most beings have difficulty distinguishing one tarn idoun from another. Their height varies from 4.5 to 5.5 feet tall. Tarn idoun possess innate arcane energies that their bodies’ formidable crystal shell manages to contain and exploit. the limbs of the tarn idoun remain separate from its torso, eerily floating some distance away from the rest of the body. This distance can vary from less than a foot to nearly eight feet. Denied access to these energies, such as when subjected to an anti-magic field, the limbs reattach to the main torso greatly limiting their reach. Nearly every tarn idoun possesses an ioun stone that constantly circles within a few feet of the tarn idoun’s head. A tarn idoun without an ioun stone is typically either a very young specimen, or it has recently given its stone away to a companion and is regrowing another.

Relations: Tarn idoun get along quite well with dwarves, given each race’s interests in things mechanical, although the dwarves at times resent the tarn idoun’s employment of magical solutions. Conversely, they also get along quite well with elves, though the elves often resent the tarn idoun’s use of technology. It is no surprise then that tarn idoun get along best with soulmechs and gnomes. Gnomes, in particular, love the presence of tarn idoun as they make excellent marks for practical jokes – at least until the gnome gets tired of the tarn idoun’s inability to “:get it”. The tarn idoun admire the ability of humans and, to a lesser extent, the orcs to adapt to new situations. Both humans and orcs, however, find the extremely alien tarn idoun somewhat discomfiting. This does not prevent power-hungry orcs from attempting to steal a tarn idoun’s ioun stone. Half-orcs, halflings and half-elves all enjoy the company of tarn idoun as prejudice seems to be a foreign concept to the crystalline beings. Dragons and their kin treat tarn idoun with great respect and demand the same of their drow servitors.

Tarn Idoun Lands: Tarn idoun are found on nearly every major planet in the Dragon Empire. They generally prefer isolated locations far from major population centers. A few dwell within colossal crystalline towers placed amidst the Empire’s great metropolises, where they live in relative seclusion.

Religion: Tarn idoun worship is rarely limited to a single god, though most find that they gravitate their prayers toward the Father and the Magus. Dualism, though tolerated, is practically unheard of among the tarn idoun.