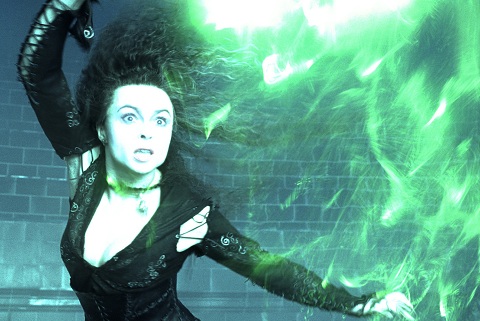 This section will be for new spells (mostly converted from the old Dragonstar rules) and information pertaining to casting in general.

Note: The following spells have not been fully evaluated yet

ARCANE CYBERJACK (Z’En spell)
School: Conjugation
Rank: Novice
Components: Gesture and Incantations
Casting Time: 1 action
Range: Smarts
Duration: 2 hours/level
Real hackers don’t use keyboards—they tap directly into the system via a datajack in their head and “run the matrix.” Z’En has created a spell that allows him to do this without any cyberware. Is undetectable by anything other than magic means- will look like a regular cyberjack hack. Magic wifi gives it a range of Smarts. This adds +4 to all Knowledge rolls dealing with digital systems. If the character fails such a roll anyway, the intense feedback causes a level of Fatigue that fades in one hour and can cause Incapacitation but not death. If the system was particularly powerful or well-protected, failure (including during a failed Dramatic Task) causes 3d6 damage (or more for very high-end corporate or military computers). Armor offers no protection from this damage.

ASSIMILATE (Players Companion w/ modifications)
School: Transmutation
Rank: Novice
Components: Gestures, Incantations and Focus
Casting Time: 1 action
Range: Personal
Target: You
Duration: 1 hour/level
When casting this spell, the caster places data chips or anything containing digital memory to his head (or otherwise close to your brain, as dictated by your anatomy) or a port that would allow access to cloud memory, and gain direct access to the information stored on the datachip. Bypass passwords and security measures. For the duration of the spell, you gain a +2 circumstance bonus on skill checks appropriate to the datachip.
Focus: The datachip, device w/ digital memory or port w/ access to cloud memory to be assimilated

POWER DOWN (Starfarers Handbook)
Transmutation
Rank: Novice
Casting Time: 1 action
Components: Gestures and Incantations
Range: Touch
Target: One object
Duration: Instantaneous
Saving Throw: Smarts roll
This spell causes an electrically powered device to suddenly turn off, even if the device doesn’t have an off switch. This includes computers, vehicles—even robots.
If the device is under someone’s direct control, the controller can make a Smarts roll vs the caster to avoid the effect.
This spell can shut down a soulmech, too. The soulmech gets the Smarts roll vs the caster but shuts down if it fails. The soulmech’s systems come back on line in 1d3 rounds. For the duration of the effect, the soulmech is treated as stunned.

(Brilliant Energy (+4): The striking part of this weapon has been transformed into intense light, causing it to illuminate an area the size of a Large Burst Template when drawn. This weapon ignores armor, as well as Parry bonuses from shields and weapons, but can only harm living matter; it inflicts no damage to undead, constructs, or inanimate objects.)

By making a touch attack the caster ignores armor, Parry bonuses from shield and weapons and deals damage directly to any living matter beneath.

ELECTRO MAGIC PULSE (Z’En spell)
Enchantment: Transmutation
Rank: Seasoned
Components: Gestures, Incantation and Components
Casting Time: 1 Action
Range: Smarts x 2
Area: Smarts
Duration: Instantaneous
This is a frequency of Brilliant Energy that does not affect living matter, but is effective against electric and electronics components or systems. There isn’t any physical damage that accompanies the EMP, and like Brilliant Energy it passes through physical objects unimpeded. Electric and electronic systems draw it like a magnet. Although it is only as powerful as a standard ElectroMagneticPulse grenade (8d6), all the damage is is focused on the electric or electronic systems

ESURIENCE (Players Companion)
School: Transmutation
Rank: Seasoned
Components: Gestures, Incantation and Components
Casting Time: 1 action
Range: Smarts
Target: One creature
Duration: Instantaneous
Saving Throw: 3 Vigor saves
By means of this spell, you inflict several days’ worth of starvation on your target all in the blink of an eye. The target makes 3 Vigor rolls to determine what level of fatigue they suffer.
(Hunger- Starting the first day after the meal was missed, the character must make a Vigor roll. Subtract 2 if the hero has less than half the required amount of food. Failure means the character gains a Fatigue level.) Soulmechs are immune to Esurience.

DETECT SURVEILLANCE (Starfarers Handbook w/ modifications)
School: Divination
Rank: Seasoned
Casting: Gesture, Incatation and Component
Casting Time: 1 action
Range: Smarts x2
Area: Smarts x2
Duration: 24 hours
You instantly become aware of anyone watching you or monitoring your activities, either directly or by electronic or hi-tech means. This does not include magical forms of scrying.
If a spy or device is within the spell’s area of effect, you know its location. Otherwise, you know the direction from which the surveillance is coming, as well as the distance (within 10%). You do not get an image of the spy, but you can immediately identify any device.
While Hacking this means the caster has a sense of what hackways are unprotected and unmonitored giving a +2 synergy bonus.

CHAIN LIGHTNING (Z’En spell)
School: Evocation [Electricity]
Rank: Veteran (Mage)
Casting: Gestures, Incantation & Focus
Range: Smarts x3
Duration: Instant
Trappings: Electricity, Direct and Ranged
This spell focuses an electrical discharge at any spot within range, seen or calculated then lesser bolts arc to a number of other targets equal to the casters rank.
The first target receives 1d6 (2 AP) damage per rank and then subsequent targets equal to the caster rank receive 1d4 (1 AP) damage per caster rank. Living target can attempt a Spirit saving throw for half damage, targets must all be within 20’ of the one proceeding it.

Special thanks to Bruce Biro for his work on spell conversions!