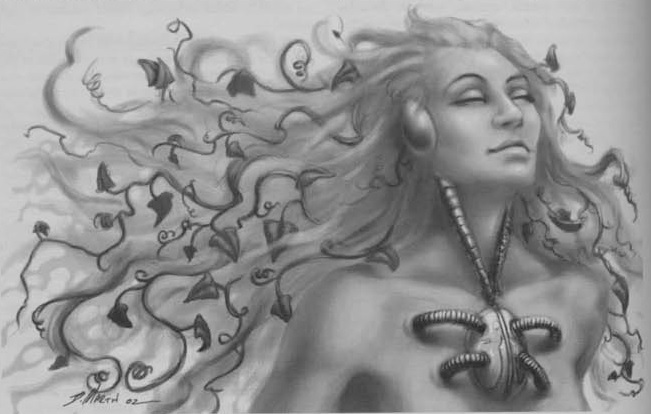 The Sathoni are a race of plant-like creatures that, through the use of magic, have spread to worlds throughout the Dragon Empire. The sathoni have always had a special bond with the planets upon which they live. Indeed, they depend upon minerals, water, and light to survive. Their traditions are well steeped in the magical forces of nature. Yet, as their populations grew, the sathoni realized that they had to establish holds on other worlds to meet their demands for resources without harming their homeworlds. To this end, the sathoni created the great starstalks, massive plants that burst forth from their worlds, spanning immense distances until they reached other worlds. The sathoni traveled inside the starstalks to new resource-rich worlds. With them, they brought their native plants and way of life. If a world was unsuitable for habitation, the sathoni employed magic and their native fauna to change the new world’s ecosystem to suit their needs. Thus, the sathoni colonized hundreds of worlds.

The sathoni expansion eventually brought them into contact with other races. Those that the sathoni could not win over with diplomacy, they overwhelmed by sheer numbers. As the number of worlds under sathoni occupation grew, the Sathoni Domain was established and sathoni expansion increased. Once the sathoni reached worlds with starcaster vessels, they realized that they could journey to new worlds much more quickly. Travel to other worlds that once took centuries could now be accomplished in days. The sathoni realized that nature – even enhanced through magic – at times had its limits. Technology, they concluded, was sometimes required to strengthen and enhance nature. Though the starstalks had become obsolete, the Sathoni Domain grew to encompass entire clusters of stars.

Then the Dragon War began. The twin kingdoms of Qesemet and Asamet quickly overshadowed the Sathoni Domain. The Domain crumbled and was quickly absorbed into the newly created Dragon Empire.

Though their influence has diminished over the past 5,000 years, the sathoni have carved a respectable niche within the Dragon Empire. They have become the Empire’s chief terraformers, employing many of their ancient techniques to make hostile planets more suitable for habitation by the dragon rulers and their kin. Sathoni advances in the areas of hydroponics and environmental engineering are rivaled only by those of the elves. However, the two races often differ in their opinion as to the extent to which technology should enhance or alter nature.

Although some sathoni remain embittered about the end of the Domain, most willingly accept the rule of the Empire. The traditions of the sathoni recognize and honor the cycles of nature. Just as the mighty oak grows above the saplings on the forest floor, robbing them of light, so too are the powerful dragons expected to usurp the resources of the weaker races. Night follows day just as war follows times of peace. Sathoni teachings explain that to everything there is a cycle. Such things are not to be fought, but merely accepted. The decline of the Domain and the rise of the Empire simply marked a new phase in the cycle of the universe. Certainly the dragons knew of this, as proven by the way that the compromise of Khelorn mirrors the cycle of nature.

Some sathoni, however, point to the fact that the mighty oak will eventually grow too heavy and too old to support itself. When it falls, it provides nutrients for the small saplings it once shaded. These sathoni believe that if they are patient enough, the Sathoni Domain will once again rise in prominence.

Until then, the sathoni go about their business. May provide agricultural resources, while others seek new worlds for terraforming. The sathoni knowledge of plants has given them considerable knowledge of poisons and the drow of the ISPD employ them regularly. A few still tend to the remaining starstalks that were left untouched by war. A few of these ancient starstalks support expansive urban centers, while others conceal pirate bases or societies of isolationists. Some say that secret cabals of ‘lost’ sathoni dwell within the starstalks. There they bide their time, preparing the seeds of new starstalks with which to invade other worlds.

Personality: Sathoni, as a whole, are pleasant beings. They are quite open-minded and tolerant of different beliefs and ideas. They expect the same treatment from others and are surprised when they do not receive it. Their liberal attitudes tend to disturb other races, As a whole, sathoni seem to lack any apparent modesty. Most sathoni attempt to maximize their exposure to sunlight during the day and to limit the amount of their clothing, whenever possible. Many sathoni choose to remain relatively inactive while engage in photosynthesis. Other races tend to perceive such inactivity as laziness. However, sathoni that are able to maximize their production of energy during the day are then able to be more active at night. Sathoni have no need to sleep and make excellent security personnel. With natural life spans in excess of 500 years, the sathoni have acquired a unique patience. They are a non-violent race, believing that any dispute or disagreement will work itself out in time. The sathoni have a strong appreciation for nature and tend to seek a synthesis between nature and technology.

Physical Description: Sathoni vary greatly in appearance, often changing with the seasons of their native or adopted worlds. They may grow in height anywhere from 4 feet to 7 feet tall. During the year, their skin changes from pale yellow to lush green, then deep red or brown before returning to a faint yellow. Similarly, the hair of sathoni changes with the seasons, with many sathoni losing their hair entirely during the winter season. While living on starships or space stations, sathoni try to maintain their seasonality. However, most sathoni spacers find that their seasonal changes begin to grow muted and indistinct until they are nearly always the same skin tone, usually a pale yellow-green or a muted brown, with hair color often a shade of red-brown all year round.

Relations: While open-minded, sathoni have better relationships with certain races than with others. Humans and halflings have life spans that equal those of young saplings and the sathoni treat them as such. Sathoni get along famously with gnomes due to their shared interests in both technology and magic. Half-elves and half-orcs always welcome sathoni tolerance. Likewise, the sathoni have few qualms with dealing with orcs, drow, or other shunned races. The sathoni view the existence of soulmechs as simply another way in which technology and magic can preserve and perhaps even improve upon nature. However, these views often place them in conflict with elves who see technology more as a blight on nature. Many elves believe that the sathoni have defamed their ties with nature and have perverted their druidic traditions. Such elves militantly oppose sathoni endeavors. The dragons and half-dragons generally give little regard to the sathoni. While the sathoni may have once been a powerful force, the relative ease with which they were absorbed into the Empire proves that they are of little concern.

Alignment: Most sathoni are true neutral. Their unique insight into the cycles of nature tends to discourage them from adopting any of the extreme alignments.

Sathoni Lands: With the advent of starstalks, coupled with their advances in spacefaring technology, the sathoni can now be found throughout the Dragon Empire. Most choose to remain planetbound, avoiding prolonged stays on starships and space stations. Even those who do take to life between the stars often bring large numbers of plants or create elaborate gardens in their living quarters.

Religion: Sathoni worship many deities. Many planetbound sathoni are involved in agriculture and worship the Mother, in her nature aspect, as well as the Stormlord. Sathoni scientists and engineers often worship the Smith, the patron of technology, or the Magus in his aspect as the source of scientific knowledge. Sathoni assassins issue their prayers to the Reaper. A few sathoni practice Dualism, with nearly all of them worshipping the Creator.

Names: Sathoni typically adopt the name of a plant that they’ve come across in their travels. Because they use whatever word the plant is called by nearby natives, sathoni have names varied as humans.

Adventurers: Often, sathoni will travel great distances to study unusual natural phenomena or rare plants. Sometimes they travel with other adventurers for safety. Other sathoni gave become accustomed to the rigors of space travel and enjoy journeying from one planet to the next, seeing all that the galaxy has to offer.

Darkness Sensitivity (-1): Due to their dependency upon sunlight, sathoni suffer a -2 to all trait tests when in complete darkness. Note this is less due to vision as it is caused by energy levels, so this penalty is in addition to any other penalty caused by darkness.
Environmental Weakness, Heat/Fire (–1): Sathoni suffer + 4 damage from heat or fire attacks, and a – 4 penalty to resist any other effects.
Hardy (+3): A second Shaken result on a sathoni doesn’t cause a wound.
Inflexable (-2): Due to their tough skin, sathoni gain a + 1 to their Toughness, but suffer a –1 penalty to all Agility trait rolls.
Light Dependency (-2): Sathoni produce their energy through photosynthesis and are dependent upon sunlight, or a similar source of light (the internal lighting aboard most starships is sufficient), in addition to water and minerals to make their own food. A sathoni character must bask in sunlight (artificial or otherwise) once per day or suffer Fatigue. This can lead to death. Fatigue is recovered at the rate of one level per hour of sunshine.
Plant Creature (+2): Sathoni are plants rather than animals and, like other plants, are immune to poison, sleep, paralysis, polymorphing or other effects that specifically target humanoid creatures. What vital organs they have are redundant or distributed, so called shots do no extra damage against them.
Regeneration (+3): Sathoni regenerate quickly. As long as they’re not Exhausted from lack of sunlight, they may make a natural Healing roll once per day (rather than once per week). They can even regrow parts of their body mass or instantly reattach a severed portion. Additionally, permanent injuries may be recovered once all other Wounds are regenerated. Treat each injury as an additional Wound for purposes of recovery (the being may try once per week).