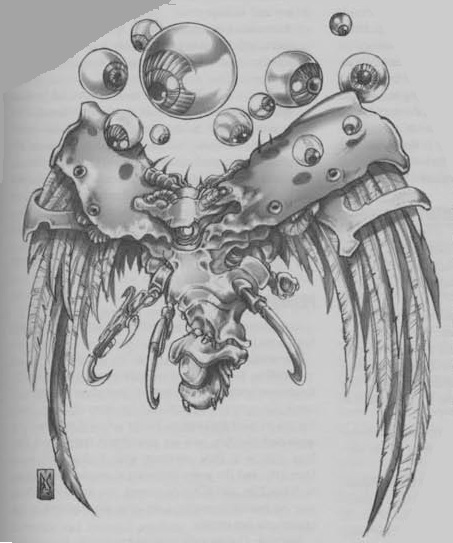 As the Dragon Empire expanded, the range of intelligent races that one could encounter expanded with it. One race that was found with increasing frequency was the quasta. Formally acknowledged during the middle of the Copper Age, the coming of the Dragon Empire has been a great boon to this race. Quasta look nothing like the humanoid races, but share many mental traits, including a sense of mercantilism, a love for technology, and an insatiable curiosity. Once exposed to Imperial technology, the quasta leapt at the opportunity to join, and have worked with a sort of comic diligence to become respected traders and inventors.

Quasta thinking is dominated by two desires – a driving curiosity and a craving for respect. Most quasta are able to reign in this inquisitive spirit enough to avoid major mishap, but put an unknown device or a clever puzzle in front of a quasta and it will work relentlessly to understand it. With their ability to examine an object from all angles at once and superior three-dimensional thinking ability, quastas make excellent technicians and pilots. Unlike most natural flyers, confined spaces do not disturb quasta, and they find space travel (especially on simpler, zero-gravity vessels) to be quite comfortable and indulge in it frequently.

Quasta are somewhat resentful of their relative size – it was exceedingly unfair of the gods to make nearly everyone else so much bigger! Combined with their unusual appearance, they feel they have to work twice as hard to gain respect in the Dragon Empire. Sometimes this backfires, leaving others with the impression that they are hyperactive and childlike. Other times this desire leads to dark ends – the handful of quasta wearing the silver trimmed black of the ISPD are as malicious and cruel as any drow. Most are simply efficient, and those who have worked closely with them realize that the quasta is a highly reliable associate, determined to never, ever fail. Just don’t make jokes about them where they can hear you.

A quasta’s body is generally bird-like with a wingspan of about 5 to 7 feet (thought their bodies are much smaller) and weighing 75 to 100 lbs. There are significant differences, however. The head of a quasta is dominated by a single central eye, and there is no beak to speak of. Instead, the mouth is quite small and located below this eye, hidden by a protective ridge. The feathers are vivid green for most quasta, thought parrot-colored variations are the norm on some worlds. Quasta enjoy using dyes and ornamentation to spice up their appearance, so many other colors and patterns are possible. Quasta have four hook-like limbs, two extending from each of their flanks, which they use in combination like a single hand. The arrangement looks awkward to most humanoids, but is actually quite functional and quasta have a noticeable gift for handling complex electronics and other technological devices. Quasta have no legs, instead maneuvering by an innate form of levitation. Unquestionably the quasta’s most distinctive feature is their independent eyes. Each has between eight and ten floating eyes that accompany it everywhere. New eyes form as buds about one inch across along the quasta’s back, and are periodically released to replace aging or damaged eyes. An eye will grow to up to six inches in diameter, and will fail (and be replaced) in about two years. These eyes range in color quite a bit, and eye coloration is a poor method of distinguishing between two quasta, since new buds do not necessarily match the colors of the eye being replaced. With their singular central eye and multiple lesser eyes, along with the quasta’s ability to levitate, it is speculated that the quasta may be distantly related to beholders. The fact that beholders have been found on every world where quasta have been spotted and they seem to share the same language only adds more weight to this theory.

Quasta have two genders, and the females lay clutches of anywhere form one to four eggs. Both parents generally tend to the children. Before making contact with the Empire, quasta had come to accept that only one child at best was likely to survive to adolescence at the age of 10, but the introduction of Imperial medical science has led to nearly all quasta children surviving. This has led to a population boom the quasta have yet to come to grips with, and driven many quasta into high risk, high reward occupations to support their growing families. The quasta lifespan has also been greatly improved, with individuals living to as old as 90 years in the Empire. Those quasta on backwater planets can still only expect to live to the age of 60 or so.

Quasta are friendly and outgoing – sometimes annoyingly so. As such they will happily deal with anyone who seems to share their interest in technology. While dwarven craftsmanship is greatly respected, the quasta have found special delight in their dealings with gnomes. A gnome and a quasta in the same room can rapidly degenerate into a technical discussion that leaves everyone else scratching their heads. Still, the quasta’s acquisitive instincts make gnomes somewhat cautious around them – a technical secret revealed is likely to end up incorporated into some new gadget and sold far and wide by one of the quasta trading guilds. Quasta are also favorably inclined towards halflings. They believe that all of the smaller races need to stick together.

Quasta hold the dragons and dragon-kin in awe. The Dragon Empire is a masterpiece of craftsmanship in their eyes, having endured for millennia, and bringing powerful medicines to the quasta people. Many quasta do not understand the significance of the shift in rule from Qesemet to Asamet, and remain deeply loyal to the Empire and eager to serve its emperor. Quasta are intrigued by soulmechs, and sometimes have to be physically restrained from examining them.

Depending on their ability to discipline their own curiosity, quasta can be found of lawful, neutral, or chaotic alignment, but many neutral quasta also pursue lives of trade or research. Those few quasta of evil alignment have usually been driven to it by ridicule, or have taken on the attitudes of the Emperor. This last group is the most frightening, as many quasta are hugely loyal to the Empire, and as the reign of Mezzenbone continues, it is likely that many more members of this race will turn to evil.

Quasta Lands: Quasta can often be found in small numbers on many imperial worlds, almost always on worlds plagued by beholders. They tend towards jungle climates and some light forests. Their population has exploded in the last 300 years as Imperial medicines have greatly reduced the quasta’s crushing infant mortality rate. Now the colorful quasta can be found on nearly any high-tech world.

The quasta adopted the worship of the Unification Church quite easily, favoring the Judge, the Mother, and the All Seeing Eye (The Magus). In the last few decades the worship of the Destroyer and the Reaper has taken an upswing as more quasta follow the example of the current Dragon Emperor.

Quasta speak their own language, which is shared with the beholders, and Common. Many quasta deliberately practice speaking in a deep voice when dealing with others, as they despise sounding “tiny”.

Quasta children are not named at all, simply referred to as “little one” until adolescence. This practice is a holdout from the quasta’s debilitating infant mortality rate. Upon reaching adolescence, the quasta may choose his or her own name, often an ancient form of a virtue that the young quasta aspires to. Since joining the Empire, quasta have adopted the habit of taking a surname after their personal name, based on the planet from which they came. As the quasta population grows, it seems likely they will have to devise a more varied naming scheme, but the quasta have yet to decide on what it will be.

While quasta have always been involved in the use and development of technology, in recent years they have also begun to ply their skills as pilots – their own movements can be related to the controls of an air or space craft, and their ability to monitor a dozen indicators or screens at once lets them integrate combat information at the breakneck pace of a dogfight. With so many young quasta coming on to these scene, traditional, relatively safe technician roles have been filled and now quasta are seeking their fortunes elsewhere.