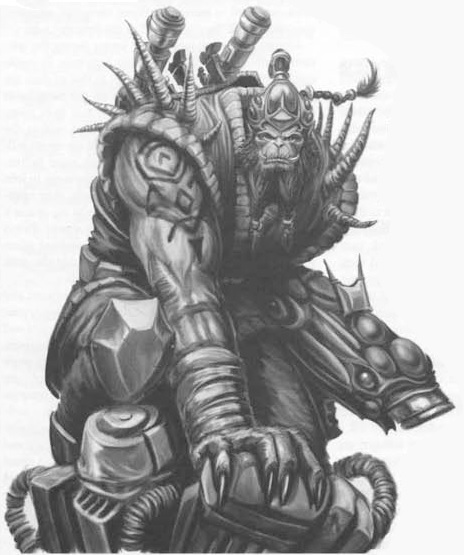 It is believed that the precursors to the oruk were the result of various unions between starfaring orcs and the more primitive ogres that they encountered. These brutish giants are quite adept at employing strength and intimidation, yet they are much more disciplined than their orc or ogre kin.

Orcs are among the most populous races in the galaxy and they have expanded throughout the Empire and beyond. During this expansion, usually on less advanced worlds, the orcs would encounter ogre tribes. The ogre tribes were often little match for the more technologically advanced orcs and entire ogre populations were enslaved. Eventually, hybrid offspring were born.

Welcome in neither ogre nor orc company, their offspring, calling themselves “oruk”, could only find companionship and comfort among each other. Left to their own devices, the oruk bred among themselves. Eventually, a new species developed. The oruk race resembles their orc and ogre kin, but also gained their own unique genetic characteristics, This genetic inbreeding resulted in much stronger oruk, with tough, durable skin, but it also created an entire population that lacked a normal lung capacity. The same thick skin and massive bone structure that gave the oruk their awesome strength then proved too rigid and inflexible to allow their lungs to expand properly. For the most part, the oruk remained on the primitive worlds of their ogre ancestors for thousands of years. There they developed a society of their own, untouched by other races.

Then the Dragon War came. The war brought an increase in offworlders and the oruk became exposed to the larger galaxy. In a short amount of time, it became clear to the dragons of Asamet that the oruk made excellent foot soldiers in the dragon’s armies. The dragons recruited large numbers of oruk for their conflict. For the most part, the oruk were willing participants. They relished the chance to obtain prestige and considerable personal wealth as part of the dragons’ forces. Those oruk communities that defied the dragons’ will were often subjected to harmful airborne chemicals and noxious spells until they submitted to the dragons’ rule.

Although the oruk took heavy losses during the war, their resolve to survive and thrive was only strengthened. With lifespans relatively equal to that of their orc kin, generations of oruk were born on the battlefields during the Dragon War. When the war was over, many oruk found acceptance and even respect within the Imperial Legions. To this day, many oruk are career military as their parents and grandparents were before. Even those who do not serve in the military work in jobs that require strength and discipline. Despite their respiratory limitations, many oruk have taken to the spacer’s life, where a strong arm and tough skin is almost always an asset. A few oruk have displayed an unusual talent for magic, which lead some to speculate that the oruk have some ogre mage blood in them as well.

Personality: Oruk are generally straightforward and gruff. They have little patience for those who appear timid or weak. They despise deceptions of all kinds and demand, and expect, total honesty in their dealings, although they don’t always give it. Oruk are much more disciplined and controlled than either their orc or ogre kin, and they resent being thought of as stupid because of their large size and goblinoid appearance. They realize that there are times when intimidation, or even diplomacy, can achieve a desired end much more quickly and cleanly than a fight. Yet, when pushed or teased about their intelligence, they are aggressive and relentless fighters. Nonetheless, oruk are cunning enough to know when they are outnumbered or outgunned, and are careful to pick fights that they at least stand a chance of winning.

Physical Description: Oruk stand between 8.5 and 10 feet tall and weigh from 350 to 500 lbs. Their skin is often a muddy yellow, though some have a darker skin closer to a deep olive green or reddish-brown. Their long, coarse hair is often a deep black or an earthy brown. Oruk eyes are predominantly red or yellow in color and their gaping mouths sport pronounced lower canines that jut forth from the lower jaw like tusks. A few walk around in the stooped posture that is common among their orc kin.

Relations: Oruk face considerable prejudices and are often loners. Orcs have little use for oruk, seeing them as tainted halfbreeds. Likewise, ogres despise the oruk, but are too lazy or indifferent to expend the effort to eradicate them. Dwarves consider oruk to be as distasteful as other giants, even more so due to the oruk’s orc heritage. Elves generally distrust them and even gnomes, usually accepting of other races, find oruk companionship undesirable. Halflings are more tolerant of oruk, as are half-elves, but oruk are most comfortable around humans and half-orcs. Humans and half-orcs respect the oruk’s ability to overcome adversity, the half-orcs particularly as they know the hardships that come with an orc heritage. Oruk also get along well with soulmechs, as they too are creatures drawn from two worlds, yet uniquely different from each. Dragons and their kin find the oruk to be particularly useful. While the oruk tend to engage in freethinking, a trait not always desirable in a soldier, the dragons find them to be relatively easy to control, if necessary. the drow have begun employing the techniques of their dragon masters, but are not nearly as successful.

Alignment: Most oruk are lawful, reflecting their tendency to follow orders.

Oruk Lands: The oruk have no lands of their own. Most are found in mercenary companies or other military organizations. Large gatherings of oruk also occur in cities and major urban centers where they are more likely to be tolerated. A number of oruk communities have fled toward the Outlands to live their lives free of those who would seek to oppress them. A few independent oruk strongholds remain on some of the more primitive worlds where the oruk developed. These worlds largely contain bleak wastelands and poor resources, and, thus were left relatively untouched by the Empire.

Religion: Many oruk worship the Warrior, who they praise for delivering them from a life of greater oppression by the orcs and ogres. The more aggressive and savage among the oruk heed the call of the Destroyer. A growing number, particularly those who are drawn to explore their heritage are drawn to Dualism. The majority of these worship the Adversary.

Language: Oruk generally speak Giant, the language of their ogre ancestors, but many also learn Common and Orc.

Names: Oruk typically have orc names, preferring to distance themselves from ogres.

Adventurers: Oruk are unusual in that most of them become adventurers. They lack a stable home life, so most of them set off to seek their fortune among the stars. Fortunately, their opposing size and incredible strength make them ideal mercenaries. Many oruk have found their place in life serving in the Legions. Others have decided that they want no part of their traditional lot in life and become smugglers or pirates.

Inefficient Lungs (-1): Due to their rigid bone structure and inflexible skin, the lungs of oruk are much less efficient than other humanoids. An oruk treats their Vigor die as one step lower (d4 minimum) when calculating how long they can hold their breath. Oruk also suffer a – 4 penalty to resist any attack or environmental effect breathing, air-borne toxins, low pressure, etc.
Long Reach (+2): Oruk have very long arms, giving them considerable reach. Oruk have Reach 2.
Low Light Vision (+1): Oruks can see in low light conditions, ignoring penalties for Dim and Dark lighting.
My muscles have muscles (+6): Oruk begin with a d10 Strength. They may raise the trait to a maximum of d12 + 3 via normal advancement; the Professional and Expert Edges may raise it to a d12 + 5.
Not Built for Dancing (-3): Oruk must pay two points per step to raise their Agility trait during character creation. Furthermore, the character must dedicate two Advances to raising their Agility during game play.
Outsider (–2): Oruk face considerable prejudices and are often loners. Orcs have little use for oruk, seeing them as tainted halfbreeds. Likewise, ogres despise the oruk, but are too lazy or indifferent to expend the effort to eradicate them. Dwarves consider oruk to be as distasteful as other giants, even more so due to the oruk’s orc heritage. Elves generally distrust them and even gnomes, usually accepting of other races, find oruk companionship undesirable. Oruk suffer – 2 Charisma when dealing with any of these races.
Really Big (+3): Oruks are every bit as big as their ogre ancestors, giving them a Size 3.
Unusual Body Type (-1): Because of their uncommon physiology, oruks seldom find clothing or armor that will fit them. Typically, they must have such items made. Because they are an unusually large, humanoid race, such items cost twice as much as normal, and they are 150% as heavy.
Wisdom is Hard (-3): Oruk must pay two points per step to raise their Spirit trait during character creation. Furthermore, the character must dedicate two Advances to raising their Spirit during game play.