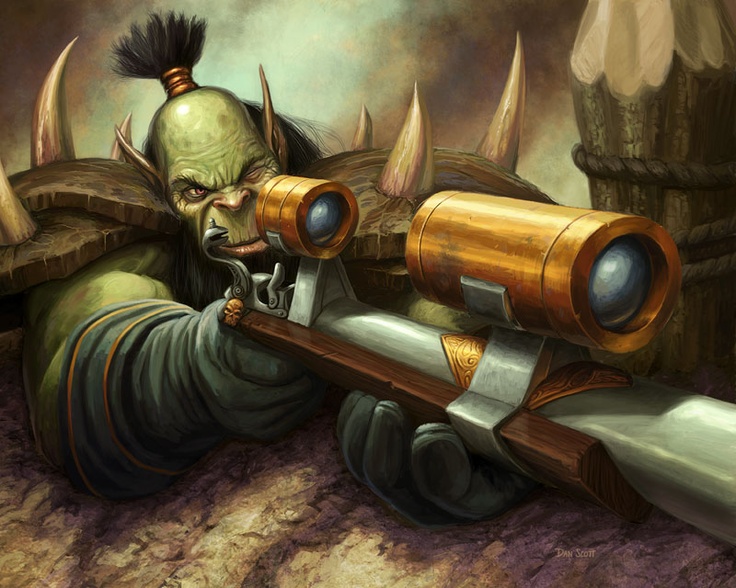 Orcs are a plague on many worlds in the galaxy. They are crude, aggressive, and warlike. They’re not particularly formidable when alone, but there are a lot of them. Despite the fact that they’re usually chaotic evil, they band together for short times in hordes capable of threatening even the most powerful empires.

Of course, not all orcs are evil. A rare few devote their lives to helping those in need, and even within a clan, many orcs are far kinder to each other than they are to outsiders. Few orcs indeed are pure enough to be paladins, but in the entirety of the galaxy, there may be some who have achieved this goal.

Most orcs are gruff and short tempered. Their idea of diplomacy is to give a foe a chance to run before attacking him. They value action over talk, and talk over thought. Despite this, their greatest leaders are known to cogitate on their deeds for long moments before leaping into action. This is perhaps what separates them from their fellows.

The orcs are a hearty people, full of the kind of love for life you can only have when you walk hand in hand with death. They enjoy drinking, fighting, wrestling, feasting, drumming, and dancing with wild abandon. They have no use for polite society—or any politeness at all. To them, such niceties are a waste of time—time better spent enjoying life instead of tiptoeing around another’s easily bruised sensitivities.

Female orcs have enjoyed some emancipation in the Empire. While they still aren’t regarded as the equals of males in their own society, there are female orcs on the battlefield and in many other stations usually reserved for males. These women may be the exception for now, but their numbers are growing.

Orcs look something like primitive or bestial humans with gray or greenish skin, sloped foreheads, jutting brows, piglike snouts, and prominent lower canines that look like tusks. Their hair is coarse and often worn in long braids. They tend to slouch, making them look less physically impressive until they raise themselves up to their full height of six feet or more. Their ears are short and pointed, and their eyes are tinged with red. They like to wear bright colors and carry large weapons, although they often neglect both their appearance and their equipment.

Orcs don’t get along with dwarves and elves and never have. Orcs find the dwarves too serious and the elves too flighty to accord either race any kind of respect. Collectively, orcs haven’t made friends with any of the other races, either. They believe orcs are the finest of all the peoples. The only ones who are orcish enough for them are orcs. The orcs have a great deal of respect for the icy cruelty of the drow, though they believe the drow spend far too much time plotting and scheming.

The orcs believe that conquest is the only proper way to extend their power and influence. Orcs were held in check for millennia by the rule of the Qesemet Emperors. With the rise of the Red Dragon, the orcs of many worlds are uniting to launch a renewed offensive on the unsuspecting planets of the Outlands. As long as the orcs don’t upset his plans, Mezzenbone is content to let them rampage across the fringes of the Empire. Their open aggression takes the media’s attention off the Emperor’s more subtle designs.

Evil orcs generally worship the Destroyer, as they have for millennia. Non-evil orcs may worship any of the Twelve, though it’s hard for them to ignore the call of violence that rages in their blood. The Warrior is the most popular deity among these orcs. Many orcs have been drawn to the worship of the Adversary. Orcs tend to see things in black and white, and a religion based on opposition and conflict is powerfully appealing to them. Only a few orcs of good alignment honor the Creator, and those who do conceal their faith for fear of exile from their clans.

Orc, a language that has no alphabet, is the native language of orcs. Sometimes the orcs use Dwarven or Common to create phonetic spellings of their words, usually on war banners. Some orcs also know Goblin or Giant.

Most orcs have only one name, but they can recite the names of their fathers going back several generations. A few female orcs can recite their mothers’ names as well.

Orcs who renounce their clan and go out to seek adventure are often reviled by those they left behind. Still, there are good reasons to leave. For instance, if the hero has committed a crime against the chieftain or the clan—which are often viewed as the same thing—he can expect to be killed if he remains behind. Others leave out of sheer cussedness, mostly because they have been told they can’t. Never underestimate an angry orc.

Enough Talk! (-2): Orcs tend to act before thinking. Smarts requires two points per step to raise during character generation.
Infravision (+1): Orcs have thermal vision, allowing them to detect and “see” heat. This allows them to halve penalties for bad lighting when attacking creatures that radiate heat.
Outsider (-1): Orcs aren’t trusted by most other civilized races, and so subtract 2 from their Charisma.
Strong (+2): Orcs start with a d6 Strength attribute instead of a d4.
Warlike (+2): Orcs choose to start with either the Berserk or the Brawny Edge from SWD for free.