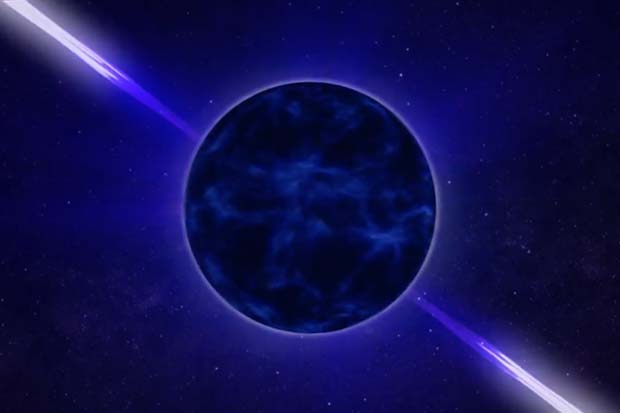 Manticore N-273 is a millisecond pulsar located in a globular cluster 395.4 light years above the plane of Imperial space. It rotates every 9.273 milliseconds and is one of many such stars used as a navigational marker when traveling in the upper south east quadrant of the dragon empire.

Pulsars are neutron stars that rotate, emitting a beam of radiation. Just like a lighthouse, this radiation can only be seen when the pulsar is facing the viewer — from the point of view of the observer, they pulse. The key, though, is that some pulsars, known as millisecond pulsars, rotate (and pulse) with incredible regularity — so much so that a clock based on the pulses of a pulsar can be more accurate than an atomic clock. These pulses can also be used to create a system that’s very similar to GPS.

Basically, by measuring the arrival times from multiple known, charted, pulsars, and comparing their expected arrival time for a reference location, you can locate a spacecraft to within five kilometers (3.1 mi). The only real complication is that pulsars generally emit very long wavelengths, and the pulses are pretty weak, by the time they’ve traveled half way across the universe, so you need a very good sensor array to detect them with any precision.

There are over six hundred charted millisecond pulsars, with some ninety-five typically used as navigational marker stars in the Dragon Empire.