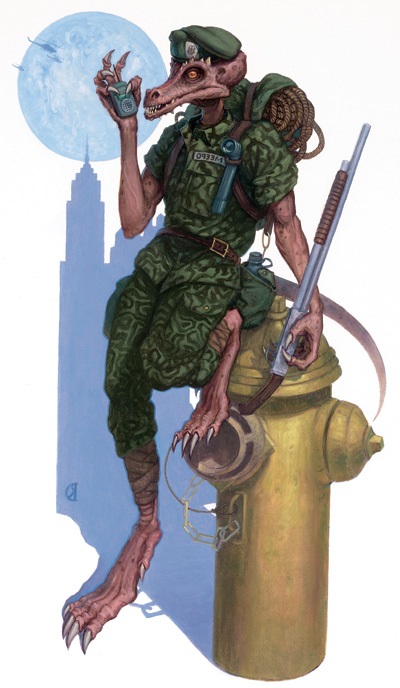 Kobolds are notorious pack rats. Typically dwelling in nomadic tribes, kobolds live on the fringes of the civilizations of other races, “borrowing” what they can from these races in order to survive. Individually, kobolds tend to be cowardly, with an overdeveloped instinct for survival. When in a group, they have an aggressive pack mentality that often leads them to challenge opponents far more powerful than is wise. By nature, kobolds are impulsive and curious creatures – this has even led a few members of the race into a life of exploration and adventure.

Kobolds can literally be found anywhere within the Dragon Empire. On any charted world (and perhaps a few uncharted ones) within the Dragon Empire’s borders, there will be at least a few of these scavengers. Kobolds genrally adopt some of the customs and ideology of the world they inhabit, taking whatever they find interesting and discarding the rest. They have little concern for traditions or for the past – only the future and the unknown holds any concern for them.

Kobolds are often called the “idiot savants” of the Empire. They have an instinctive knack for understanding complex technology that defies all logic. Despite the fact that most kobolds have no formal education and cannot even begin to explain the simplest principles or physics or the other sciences, they can easily use, adapt, and repair the existing technologies of other races for their own purposes. They cannot, however, create or invent their own original technological devices – they have little creativity, and do not possess the knowledge to make an idea into a reality in any event. The only exception to this lies in the field of trapmaking, where kobolds seem to possess a devious sense of originality, much to the detriment of others.

The “idiot savant” label also applies to the magical abilities of the kobold. In general, kobolds have no patience for formal education, and most cannot even read or write. However, kobolds are distant relations to the dragons themselves, and as such they are born with innate magical talents just waiting to be tapped. A kobold wizard is a rare thing indeed, but the instinctive magic of sorcerers is a perfect fit for the kobold race.

Their love for technology makes most kobolds a constant nuisance to mechanics all over the Empire – they are constantly trying to borrow or outright steal any technological device that may catch their fancy, even if they have no idea as to the actual purpose of the devices that they take. The never throw these devices away, making the hoarded high-tech collections of kobolds extremely useful in the hands of certain individuals, and downright dangerous in the hands of others. While kobolds loathe actually sharing the devices in their collections with others, they love to show their collections to others whenever possible, despite the fact that they often have no clue what the devices they possess actually do. Kobolds also collect magical items in this manner, although to a lesser extent. A meeting between two or more kobolds almost necessitates immediate comparisons between their individual hoards, which is followed up with much arguing and some trading of items between the kobolds’ collections.

Kobolds love to talk, even if no one is listening. They are natural storytellers, and they constantly embellish the stories of their exploits to the point of being ridiculous. Toa kobold, the truth is usually something that gets in the way of a good story. Kobolds always speak of themselves and their actions with a grand importance, no matter what the situation may be. However, they genuinely do not realize they’re bragging unless others point that fact out to them. They also love to talk tough, especially when they feel that there’s no danger of someone calling their bluff. Storytelling is a competitive art among kobolds, where the ability to tell an outrageous and entertaining tale is a mark of pride. Unfortunately, kobolds don’t realize that other races don’t place similar value on storytelling – and because of this, their tales often lead them into trouble.

Despite their bravado while telling a story, when faced with actual conflict, kobolds prefer to talk their way out of combat. These are the times when the kobold’s cowardly nature rears its ugly head – they will make incredible offers and concessions to an enemy in order to weasel out of a fight. Should their words prove useless, they always attempt to first flee or hide rather than actually engage in combat. Even a kobold sorcerer’s choice of spells in such situations reflects this – spells like charm person and sleep are infinitely preferable to a kobold than fireball. A kobold that enters combat is a kobold that sees no other options for survival. “Don’t worry, a kobold’s got your back,” is a common phrase used by dwarves to indicate an utterly hopeless situation – it is unfortunately also a harsh but accurate statement regarding the kobold’s cowardly instincts.

Diminutive in stature, kobolds range between three and four feet in height. They have scaly, reptilian skin that can be an infinite number of dull colors, but most kobolds tend to be green, brown, or orange in coloration. They have doglike heads that seem disproportionately large next to their small, scrawny bodies. Their eyes are dark and red, constantly darting about and looking for something new – or maybe just an escape route. Most kobolds either wear soiled rags or tattered clothes better suited for other races. This is because they would rather wear ready-made clothing that fits badly than make their own. This shabby appearance unfortunately encourages the disdain that other races have for kobolds. However, if a kobold possesses a high-tech gadget, that item is always prominently visible and highly polished, especially if other kobolds are around.

Most intelligent races view kobolds as nothing more than annoying vermin. Kobolds are generally disliked, but they are not hated. This is mostly because few races actually fear kobolds or believe that they could present any real threat. Since this general feeling of contempt for kobolds has endured for many generations among so many races, kobolds in turn regard almost all other races with a certain degree of dislike – until they want something from those selfsame races. Then, the kobolds suddenly try to become these races’ newest best friends and allies. Kobolds like to nurse a grudge, but not at the expense of gaining something new and exciting, such as technological devices.

Kobolds are notorious for having a short attention span – a trait that has severely impacted their relations with nearly every intelligent race in the Dragon Empire. A kobold’s promise is generally considered worthless, and overall, this assumption is accurate. Kobolds aren’t necessarily liars, but they are forgetful – kobolds often make impossible or conflicting promises to other creatures in the hopes of impressing them. It often doesn’t dawn on a kobold that such promises are not possible until well after they’ve been made, and by that point the kobold has usually forgotten that the promises were made in the first place. Combined with their impulsive behavior, it’s small wonder that most races consider kobolds to be a sure sign of coming trouble.

The most productive relations that kobolds have with other races tend to be with humans and half-dragons. Humans find the kobolds to be highly entertaining, if slightly annoying, while kobolds are endlessly fascinated with the human ability to turn dreams into reality. Meanwhile, the high-born half-dragons recognize the fact that they are related by blood – no matter how distantly – to the lowly kobold, and try to treat them with a certain amount of respect. Kobolds don’t always understand why a half-dragon would choose to treat them so nicely, but they are respectful in turn to the more powerful race.

Kobolds are also fascinated with soulmechs and the concept of mechanical life, and try to associate with the mechanical race whenever possible. However, most soulmechs find the disordered, haphazard existence of kobolds distasteful. Elves, dwarves, and other similar humanoid races do not view the kobolds with the same good-natured amusement – they see kobolds as a problem waiting to happen. Kobolds, in turn, find these humanoids to be condescending and arrogant. Most kobold alliances are made instead with the goblinoid races, although these partnerships are nearly always self-destructive. The goblinoids only want to exploit the kobolds’ knack for modifying technology, and the kobolds quickly find themselves as servitors or slaves to their humanoid “partners.”

Due to their disorganized nature, kobolds are generally chaotically aligned. Their selfish tendencies often lead to either a chaotic neutral or chaotic evil alignment, although this is by no means always the case. Those kobolds who venture out into the Empire for a life of adventure and excitement typically are of chaotic good or neutral good alignment.

Kobolds have no lands of their own. They are scavengers, living on the edges of the territory claimed by other races. Kobolds that are actually disciplined enough to follow an organized religion tend to worship the Trickster. Kobolds appreciate a faith that places importance on cunning and guile instead of brute strength and pure intellect. However, most kobolds place little importance on religion, and choose not to follow any particular faith. Kobolds can speak both the Draconic and Common tongues. However, only a handful can read or write. Kobolds use draconic naming conventions, much to the half-dragons’ displeasure.

Some curious kobolds have found the discipline to learn and to listen. These are the kobolds that set out from their homeworlds, wide-eyed and light-fingered. While rare, these kobolds are the daring sorts who seek fame and glory, and in doing so often become folk heroes for the entire kobold race, no matter how insignificant their exploits may actually be.

Armor (+1): Kobolds, like the dragons they claim relation to, have thick scaly hide, giving them + 2 Armor.
Everything is Tougher than You (+2): Being pretty far down the food chain, kobolds begin with the Alertness Edge, granting them + 2 to their Notice rolls to hear, see, or otherwise sense the world around them.
Idiot Savant (+1): Kobolds begin the game with a d6 with one skill from the following list: Knowledge (Trapmaking), Knowledge (Mining), Repair, Stealth, Streetwise, Survival or Tracking.
Lightning-fast Reflexes (+2): During character creation, kobolds begin with a d6 in Agility, and may raise it to a d12 + 1 via normal advancement.
Light Sensitivity (-1): Kobolds suffer a – 4 penalty to resist effects involving bright light and to Notice checks when exposed to bright light without eye protection.
Low Light Vision (+1): Kobolds can see in the darkest of places, and thus ignore penalties for Dim and Dark lighting.
Small (-1): Diminutive in stature, kobolds range between 3 and 4 feet in height. This gives them a Size of – 1 and subtracts 1 from their Toughness.
Weak (-3): Kobolds are physically weak and suffer a – 2 penalty on all Strength trait rolls, including strength-related damage.