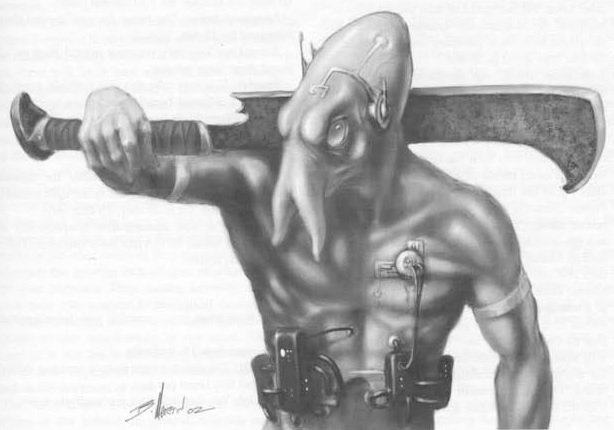 Ever since the expanding Dragon Empire made contact with the stars surrounding the Dark Zone, bizarre rumors and even stranger creatures have been filtering into the Empire. One of the most terrifying of tales that has sprung up since the Explorer Corps first encountered this region has been the existence of a vast mind flayer kingdom. While found in small groups on a number of planets, these horrific creatures have always remained deep within those planets, unwilling to emerge into the interstellar society.

The drow of Mezzenbone’s ISPD are particularly keen on tracking down these tales – no other race has suffered as much at the hand of these ruthless horrors. So when stories of mind flayer-like creatures began to circulate along the fringes of the Dark Zone, the ISPD sprang into action. They launched an ill-fated expedition into the area. The security recordings from the ship were later recovered, showing the expedition members falling before the onslaught of a group of blurry figures that seemed to be able to see around corners and mentally stun their opponents. A year later, the first ith-kon turned itself into the ISPD, revealing the information below. A day after that, the ith-kon was dead, killed by another member of its race that had somehow penetrated deep into the ISPD’s headquarters. When the ISPD agents attempted to capture the assassin, it blew itself and most of the room apart with a device strapped around its waist. Since then., other ith-kon have turned rogue, but none have gone to the ISPD with further information.

The ith-kon, it turns out, were created by the mind flayers through careful breeding and unspeakable magical manipulation to serve as psionic commandos. As servitors, it was not deemed necessary for the ith-kon to share in the full mental powers of their mind flayer masters. Attempts to “prune” these abilities in the subspecies gave rise to several new gifts, which allowed the ith-kon to achieve a more respectable place within the mind flayer hierarchy. Most importantly, they developed remarkable powers of stealth. With the ability to blend into their surroundings, the ith-kon quickly became spies operating within the Dragon Empire. The most powerful of the ith-kon can even stun their opponents with the powers of their mind alone, making them deadly combatants and assassins.

The typical ith-kon is quiet and secretive, going out of its way to avoid being the center of attention – except in private, where they prefer to terrify and dominate those they have cornered. They are very goal oriented, and without instructions or a self-imposed objective they become listless and depressed. They are careful planners and very deliberate in their actions, and rarely fail to account for the consequences of their acts. As junior partners (or most favored slaves, depending on who is asked) in the mind flayer’s kingdom, their status is high, but only so long as the individual ith-kon achieves its assigned goals and advances the agenda of the race. As such, they tend to place deep trust in each other and hide their shared fear of their masters.

While they are initially mistrustful of everyone and everything, those who have operated outside the Dark Zone for extended periods often come to trust one or two close allies who have consistently helped them in the past. This uncharacteristic trust (something no mind flayer would ever consider) has helped the ith-kon to pull off assignments that their masters – with their more limited social skills – considered impossible.

Non-evil ith-kon are uncommon, but not impossible. In some cases a lone ith-kon has been grievously injured, and then nursed back to health by a kind-hearted individual. Ith-kon who place their trust in good individuals may also come to emulate their associates and gradually shift alignments. Within the Dark Zone, however, few ith-kon have the opportunity to consider moral alternatives, and those who rebel in this fashion are quickly slain.

Ith-kon share the same general shape as a mind flayer. They have gray skin, a lumpy head, bulbous eyes, and a roughly humanoid torso. Ith-kon are easily distinguished from their masters by the knowledgeable viewer due to their less numerous facial tentacles and heavier, more muscular build. These adaptations were originally intended to create a slave race, suited to physical labor and supervising other slaves. Ith-kon weigh between 140 and 200 lbs. They live for about 60 years (less if residing in the Dark Zone) and reach maturity after only 12 years.

Those ith-kon who have only known life in the Dark Zone have the disposition of a whipped dog – they will bite anything, including the hand that feeds them. But as they adapt to life outside of the Dark Zone, they can become surprisingly tolerant – anyone can be viewed as either an ally or a tool. As such, ith-kon can get along with almost all the races of the Dragon Empire. There is one notable exception – loyal ith-kon despise drow. This hatred seems to be encoded into their very cells, and is unwavering in its fierceness. This natural animosity is only intensified by the fact that drow make up the majority of the ISPD, and are a major threat to the mind flayer kingdom. Renegade ith-kon don’t seem to suffer from this odd hatred, though they remain uncomfortable around drow. Somehow, by abandoning their masters, the ith-kon are able to suppress whatever conditioning the mind flayers have inflicted on them. These ith-kon are free to form their own opinions of the other races.

Many ith-kon are evil, but exceptions exist. Virtually all ith-kon are lawful, and chaotic individuals are even rarer than good individuals. Chaotic members of the race are considered deviants by other ith-kon, while good-aligned indivuduals are merely seen as weak and soft-hearted.

The ith-kon have no worlds or territories of their own, but can be found on many worlds within the Dark Zone. Outside of that dangerous realm they are only found as individuals or small groups who do not announce their presence to others.

Ith-kon rarely have religious leanings – the ancient powers venerated in the Dark Zone would be hard to describe in Unification terms (being more of a form of ancestor worship among the mind flayer overlords). Outside of the nebula, some ith-kon find solace in the worship of the Reaper.