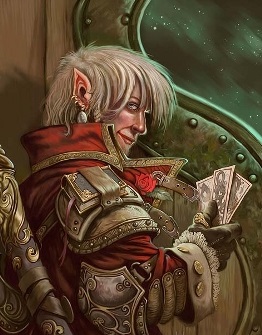 The shortest people make some of the best spacers in the galaxy. Living space is always at a premium aboard starships, and the cockpits of space fighters are even more confined. Halflings are more comfortable in cramped quarters than any other race, and they’ve adapted well to the rise of a spacefaring civilization.

Halflings also have a well-earned reputation as being the best in the professional service industries. Computer programming, for instance, is among their most common careers. They treat such challenges as riddles to be solved, a skill at which they’ve always excelled.

Halflings are well integrated in the Dragon Empire. They don’t have an official homeworld but still maintain a fierce pride in their heritage. Just about every civilized planet hosts several halfling cultural celebrations every year. Halfling have a reputation as the best hosts in the galaxy.

Halflings are a good-hearted people, and the other races generally look upon them fondly. Only the drow and the orcs harbor any ill will toward halflings, and this enmity is only a reflection of the evil creatures’ black hearts. Dragons and their kin are pleased by the dedication that halflings put into their work, but they tend to view them with a heaping measure of suspicion. Halflings realize their small stature can cause people to underestimate them, and they often use this to their advantage. People tend to forget that a gun is just as deadly in the hands of a halfling as in those of an orc.

Halflings can be found on most of the inhabited worlds of the Empire. They live in large cities and on quiet farms in colonial settlements. Many halflings are career spacers.

Halflings worship many deities, but they have a special place in their hearts for the Trickster. A faith that rewards wits over brawn appeals to these diminutive beings.

Fortunate (+2): Halflings draw one additional Benny per game session. This may be combined with the Luck and Great Luck Edges.
Keen Hearing (+2): Halflings are very sharp eared. They gain a + 2 to any Notice rolls that involve sound.
Short (-1): Halflings average only about 4’ tall. This gives them a Size of – 1 and subtracts 1 from their Toughness.
Slow (-1): Halflings have a Pace of 5" and their running die is reduced by a die type.
Soft Stepping (+1): Halflings move much more quietly than the ‘Big Folk’ and begin with a d6 in Stealth.
High Metabolic Rate (-1): Halflings have a higher metabolism than other races, and are therefore almost always hungry. Within their own communities, they eat up to seven meals per day. Other races are frequently annoyed by halflings’ constant snacking, and complaints when food is not readily available.