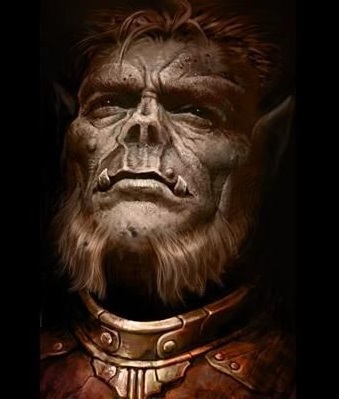 While most of the sentient races have found new opportunities and made homes for themselves in the Dragon Empire, orcs never seem to fit in. Orcs are among the most populous races, however, and many find their ways to the large urban centers of the Empire. On occasion, orcs interbreed with the humans who share these cities. The more tolerant elements of the Empire have been fighting racial prejudice for millennia, but most of the other races still don’t think much of half-orcs. The long-lifers consider them too crude, and their orcish kin think they’re not crude enough. Nevertheless, millions of half-orcs make the Dragon Empire their home, though often on the margins of society.

Many young half-orcs find some measure of acceptance as soldiers in the Imperial Legions. The savage traits of orcs and the discipline and ingenuity of humans blend together in half-orcs, and they are often ideal soldiers. Countless half-orcs have enjoyed successful careers in military service.

Half-orcs often have a hard time fitting in, and this is another reason why the military life often appeals to them. At least in the Legions, half-orcs feel like they have a home. Half-orcs and dwarves don’t get along much at all, because most dwarves can only see the despised orc side of a half-orc’s heritage. Most elves feel much the same. The drow, on the other hand, often keep half-orcs around as servants or soldiers, though most half-orcs are wise enough to know when they’re being used. Orcs, of course, despise most half-orcs. They see them as the representation of the slow thinning of their blood, and they generally exile those of mixed heritage shortly after their birth. Those half-orcs who are raised in orcish society are usually made to feel like pariahs, and they often come to hate the orcs and their own orcish blood as well.

Gnomes and halflings are a bit more tolerant than most, but half-orcs feel most at home with half-elves and humans. They share the mixed-blood status of the half-elves, giving them a common bond. Humans are often willing to focus on the traits they share with halforcs, rather than emphasizing the differences. Dragons and their kin enjoy the simple savagery of orcs and half-orcs. From the dragons’ perspective, a half-orc’s greatest virtue is predictability. Of course, this view is often rooted in racial stereotype, but such is the plight of half-orcs in the Dragon Empire. Half-orcs get along just fine with soulmechs. Halforcs don’t treat soulmechs with the reverence afforded by their orcish kin, but they still have a great deal of respect for them.

Half-orcs have no lands of their own. They can be found in the lower class neighborhoods of large cities or wandering the farthest reaches of the Outlands. They are most often encountered in the military, private security, and criminal organizations.

Infravision (+1): Half-orcs gain their thermal vision from orcish parents, detecting and “seeing” heat. This allows it to halve penalties for bad lighting when attacking creatures that radiate heat.
Outsider (-1): Half-orcs aren’t trusted by most other “civilized” races. They subtract two from Persuasion rolls when interacting with beings besides half-orcs.
Hardened (+2): Half-orcs have some of the strength of their ancestry. They start with either a d6 Strength or d6 Vigor instead of a d4.