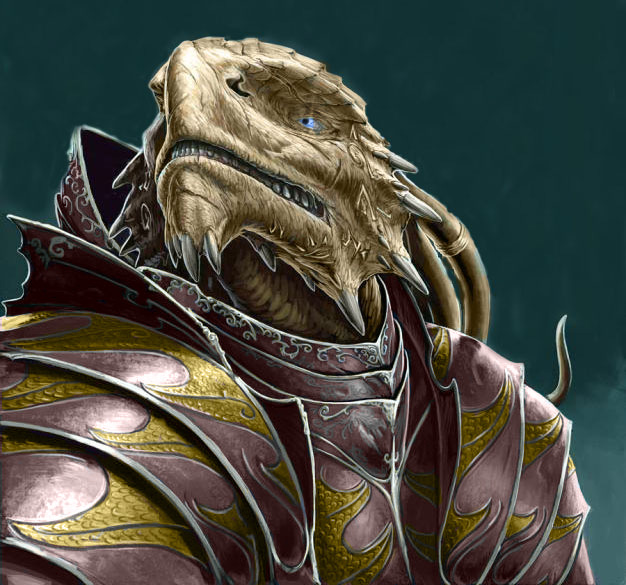 In an empire ruled by dragons, half-dragons are the pampered offspring who don’t have a prayer of ascending to the throne. Most half-dragons spend their days either wasting or abusing what power and riches they have by virtue of their birthright. But there are those few who strike out on their own, whether out of greed, boredom, or a true sense of adventure.

Half-dragons are usually spoiled rotten. They’ve been catered to their entire lives, and they’ve come to expect that tradition to continue uninterrupted. Some (generally the children of Qesemet) actually do their best to use their positions for the betterment of themselves and those around them. Others (the spawn of Asamet) are only out for themselves, often chafing at the fact that they can never rise as high as their dragon kin.

Half-dragons vary a lot in appearance, depending on the color of the dragon parent and the race of its mate. Powerful dragons can change their shape and can mate with just about anything, having been known to produce some bizarre matches. The dragon often reveals its true nature after the mating – if then – by which time it's too late for the unwitting partner to do anything about it. Half-dragons always have scales, a snake's slit eyes, huge teeth and claws, and elongated faces. They sometimes have tails and they may also have wings, but these are usually vestigial.

Half-dragons are feared and even respected throughout the Dragon Empire. These bastard offspring are often the beneficiaries of trust funds set up by their dragon parents to keep the product of their dalliances in a comfortable lifestyle. Since half-dragons vary so much in their parentage, it’s difficult to make generalizations about them as a race. The non-dragon parent usually raises the halfdragon child, and this does more to determine the halfdragon’s prejudices than her draconic nature. A half-dragon tends to follow her dragon parent in terms of temperament, but this isn’t always the case. The non-dragon parent usually takes on most of the duties of raising the child, so that parent can influence the half-dragon even more. The tension between the two sides of a half-dragon’s nature can lead to serious emotional conflict.

Half-dragons do not have their own lands. Not surprisingly, there are more half-dragons found on the throneworlds of Asamet and Qesemet than anywhere else. There are neighborhoods in the capital cities of these planets in which half-dragons tend to congregate, forming bonds based on their shared heritage. Most half-dragons on a given planet tend to have dragon parents of the same clan, which only helps to strengthen such friendships.

Half-dragons worship any of the deities in the great pantheon. Most honor the patron god or goddess of their House. There are few half-dragon Dualists, as followers of the heresy often suffer a loss of status and respect among the conservative dragon aristocracy.

Draconic Hide (+3): Half-dragons may appear mortal, but they partake of their dragon parent’s hardiness. Their thick hide grants them + 6 Armor.
Bite/Claws (+3): Both attacks do Str+d4 damage. Note that Bite allows a character to bite grappled prey rather than just crush; and claws add + 2 to Athletics when climbing most surfaces.
Breath Weapon (+1): Half-dragons can breathe fire, cold, acid, or other energy based on their draconic heritage (see table below) by making an Athletics roll as a limited action. This uses the Cone Template, may be Evaded, and causes 2d6 damage (3d6 with a raise on the Athletics roll). A Critical Failure on the attack causes Fatigue to the user.
Environmental Resistance (+1): Half-dragons receive a + 4 bonus to resist negative effects from their ancestral element, and damage from that element is also reduced by 4. .
Environmental Weakness (-1): Half-dragons suffer a – 4 penalty to resist negative effects from their opposed ancestral element, and damage from that opposed element is also increased by 4. .
Draconic Arrogance (-2): It’s called the Dragon Empire. You are a scion of galactic rulers! Of course you have the Arrogant Hindrance.
Dragon’s Conceit (-2): A half-dragon gets their ego from their dragon parent – there’s nothing out there they can’t defeat. At least that’s what half-dragons tend to think. They believe they can do most anything and never want to retreat from a challenge. They are not suicidal, but they certainly tend to take on more than common sense dictates.
Draconic Avarice (-1): The draconic blood in your veins sings to you to measure your worth in material possessions or wealth. Half-dragons will argue bitterly for more than their fair share of any loot or reward the party might come across.

Return to Nuts and Bolts