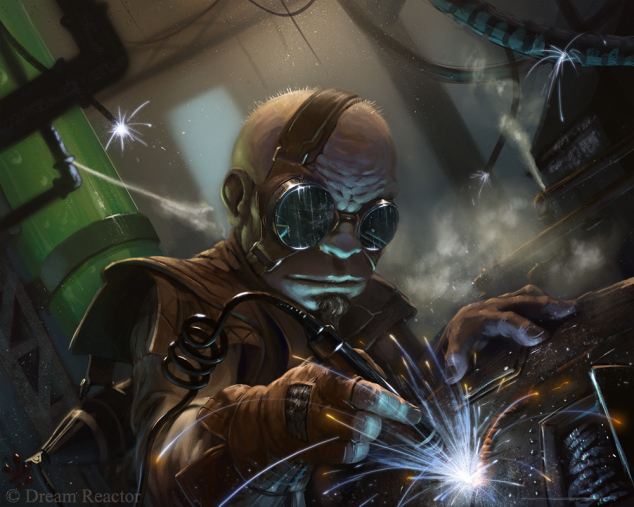 Gnomes have adapted well to life in the Dragon Empire, perhaps better than any other race but the dragons and their kin. Their small stature makes it easy for them to get around in the most cramped ships and space stations, and their fondness for living underground serves them well.

Gnomes have always taken easily to the sciences, so the development of technology has been a boon to them. They are known far and wide for their skill with high technology and their willingness to wander the stars. Gnomes were the first race to achieve space travel, and though other races long ago joined them, none are as comfortable in the vast reaches of space.

Politically, gnomes as a group are a nonentity. They are far too focused on their work to concern themselves with political issues. They rarely band together in racial groups larger than their direct families. The Gnome Commerce Guild is more of a trade organization than a political body, though its leadership does try to influence trade and tax laws.

Gnomes are friendly with nearly all other races. They are proud of the fact that they are apolitical. All they care about is that their work is useful and that they are fairly paid for their efforts. Still, gnomes have their favorites. They enjoy working with dwarves, since they seem to share a common love for crafted things. Their mutual fondness for cramped, even dark places means they are often in close contact, too. Gnomes get along fine with elves, even the drow. They know that these tall folk tend to look down on gnomes, literally and figuratively. The drow might only use gnomes for their talents, but the gnomes don’t really mind, since to them the job is the important thing. Most gnomes have a healthy respect for dragons and their kin. They recognize the dragons’ power and the control the imperial bureaucrats exercise over the research grants many gnome scientists and technicians covet so dearly.

Gnomes are friendly enough with the short-lifers such as humans and halflings. They find orcs to be rude and unsophisticated—which is usually accurate—but even such lowbrow creatures have their place. Most gnomes are fascinated by soulmechs. The greatest feat a gnome can accomplish is the creation of a new soulmech, and many pursue this field as their vocation.

There is no single world that gnomes call their home. The closest is the planet Aurora, the throne world of House Deserene and the headquarters of the Gnome Commerce Guild.

Gnomes are as comfortable in darkest space as they are in the friendliest lands. Modern gnomes have largely abandoned the natural world and tend to live in large cities. They don’t miss the connection much, preferring the clean, mathematical lines of a city or a space station to the chaos of the wilderness.

Few gnomes are truly devout, and most prefer to put their faith in science and technology. As a people, gnomes tend to worship many gods, rather than a chosen patron. They honor the Father as the master of the universe’s grand design, and gnome scientists and mechanists often worship the Smith or the Magus, and those involved in commercial pursuits pay tribute to the Merchant. Very few gnomes have converted to Dualism, and those who have usually worship the Creator.

Clever (+2): Gnomes are very clever. They start with a d6 Smarts instead of d4.
Low Light Vision (+1): Gnomish eyes are accustomed to the dark of the underearth. They ignore penalties for Dim and Dark Lighting, (but not Pitch Darkness).
Slow (-1): Gnomes have a Pace of 5" and their running die is reduced by a die type.
Small (-1): Gnomes average only about 4’ tall. Their small size subtracts 1 from their Toughness and gives them a Size of – 1.
Studious (+1): Gnomes love knowledge in some form or another. They start with a free d4 in any one Smarts-linked skill.