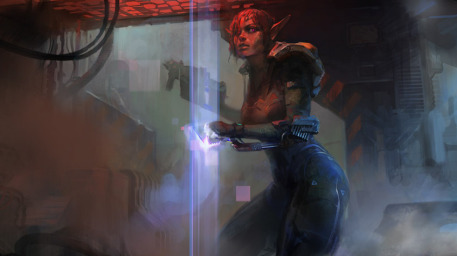 The rise of interstellar civilization has been a challenge for the Elves. Elves glory in the beauty and complexity of nature, and they are blessed with a strong, spiritual bond with their ancestral homelands. Elves often resist the industrialization of their worlds, and many find the prospect of immigrating to new and strange planets rather unappealing. Elves are also poorly suited to the confinement and drab austerity of starships and space stations.

Still, the elves are long-lived, and they’ve had millennia to adjust to the opportunities presented by galactic civilization. Ultimately, the elves decided that if they must leave the green worlds of their birth behind, they would bring a part of them along wherever they traveled.

Elves claim to be the first ecologists. Due to their long lives, they were able to observe the ecological changes in their homeworlds over the course of centuries. Elven civilizations were among the first to observe and demonstrate the dangers of industrialization. Elven climatologists didn’t have to search through ancient records to track global warming trends. They observed them firsthand.

Elven scientists have made great strides in the areas of hydroponics, terraforming, environmental engineering, and other fields concerned with encouraging living things to thrive where they shouldn’t. The elves have bio-engineered organic starships that explore the far reaches of space protected by both science and sorcery. The elves have made new homes for themselves in the galaxy and have brought to countless worlds a touch of the magic that infused their primeval forests.

Elves prefer the company of their own kind, though they are friendly with any outsiders who demonstrate respect for the natural world. Elves are on good terms with most of the short-timers—those races with substantially shorter life spans—with the notable exception of the orcs, who they view as unrepentant despoilers of nature. Many elves believe the galaxy would be a lot better off if orcs were an endangered species. Most elves don’t care much for dwarves or gnomes. To them, these people represent the uncontrolled industrialization of the galaxy. Dwarves and gnomes are unabashed exploiters of the natural world, and this alone is enough to earn the distrust of many elves. Elves have a dark place reserved in their hearts for their ebon-skinned cousins, the subterranean drow. They can intellectually understand how the other races might err in their ways, but they find it difficult to excuse their cousins’ cruel nature.

The elves respect the dragons and their kin, though often grudgingly. These creatures are among the few who can take a longer view of things than the elves. Despite this, elves know that most dragons view the galaxy as their plaything, a perspective most elves abhor. In general, elves are troubled by soulmechs. They believe a person’s death should be respected. Forcing a soul to abandon its rest to drive a mechanical body seems cruel in the extreme.

Elves prefer to live in harmony with unspoiled nature. Unfortunately, untouched but habitable environments are difficult to find. A few worlds have been declared off limits to industrial development, protected as global nature preserves by previous emperors. Elves tend to congregate on these worlds, though they often live in fear that the new Dragon Emperor will rescind the protections traditionally granted their homes.

For a long time, most elven cultures ignored galactic politics, believing such concerns to be beneath them— right up until they became embroiled in the Dragon War. During the reign of the Qesemet emperors, the elves became complacent once again. These days, however, they have taken a more active hand in politics. The various elven realms and republics throughout the galaxy have banded together in a loosely bound coalition—the Elven Nation—to make their common views heard. Previous emperors created an advisory position on the Imperial Council for the elected representative of the EN, and this ambassador’s words carried much weight in the Empire. With the advent of Mezzenbone’s reign, relations between the elves and the Empire have worsened. In a sign of his disrespect for the EN, Mezzenbone appointed a drow to the elven ambassador’s position. Many elves have been expecting trouble with the new emperor for centuries. They long ago began to grow a number of new starships. Some of these are large enough to transport entire cities full of elves should such an exodus become necessary.

Most elves worship the Mother in her nature aspect, though not always exclusively. A growing number of elves have converted to Dualism, however, and worship the Creator.

Agile (+2): Elves are graceful and agile. They start with a d6 in Agility instead of a d4.
Elven BioTech (-1): Much of the technology used by the elves are intricately designed, and incorporate biotech elements. They therefore often find standard devices somewhat confusing, so they suffer a – 2 to Trait tests involving computers and other devices not of elven origin. If they roll a Critical Failure while using such a device (and it doesn’t already have a built-in effect), it’s broken. If the GM feels it’s appropriate, it can be fixed with a Repair roll and 1d6 hours.
Low Light Vision (+1): Elven eyes amplify light like a cat’s, allowing them to see in the dark. Elves ignore penalties for Dim and Dark lighting, (but not Pitch Darkness).