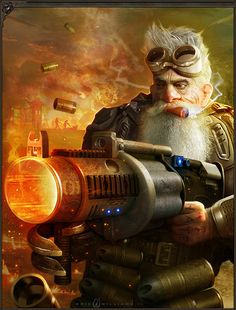 Dwarves have adapted well to the stars. They enjoy a natural affinity for conditions of sunless confinement and the kind of pumped-in, stale air you find on starships, space stations and remote outposts.

Dwarves use their natural skills as miners to extract precious minerals from even the most desolate planets and airless asteroids in the galaxy. A dwarven miner is rarely seen far from his spacesuit, which he cares for better than himself.

Apart from their knowledge of mining, dwarves are great engineers. They may not have the talent of the Gnomes for innovation, but are reputed to work out the details and do not take shortcuts. Much of the infrastructure and major engineering works of the Empire have had at least the supervision of dwarf engineers, if not completely designed by them.

Some of the most wealthy and ambitious dwarves have claimed entire planetoids for themselves, burrowing their tunnel fortresses deep into the rock. It reminds them of their ancestral homes, and the remoteness is even more comforting to them than the roots of the oldest mountains. Some of these places have even been fitted with their own engines or starcasters to ensure their solitude. Finding a single rock in the solar system is difficult without the right coordinates. If it can move on its own, the challenge becomes nearly impossible. Some of these space fortresses were abandoned in ages past. In some cases, the owner’s luck ran out, and a band of orc pirates or worse seized the stronghold for its own. Other fortresses were lost to unknown perils and now float aimlessly between the stars, waiting for some foolhardy souls to find them, get past their automated defenses, and strip them of their treasures.

Compared to their relations with orcs, most dwarves get along famously with everyone else. Dwarves don’t pay much attention to humans and halflings. They like gnomes just fine, though they sometimes find them irritating after prolonged contact. They don’t care much for elves, but they tolerate most varieties. Drow are the exception, and dwarves despise them as tools of the current dragon regime. The dwarves hold a great deal of respect for the dragons, even the evil ones. Dwarves recognize great power and cunning when they see it. They habitually criticize short-lived peoples such as humans for their lack of long-term vision. They don’t realize the dragons see them in the same light. Their respect doesn’t mean that the dwarves don’t covet the dragons’ power. In fact, many dwarves have secretly joined any number of insurgent forces hoping to overthrow the current emperor. But most dwarves are too canny to say anything openly against their ostensible rulers. Dwarves are not so cautious with half-dragons. These creatures may be powerful, but not so much so that they must be fawned over. Dwarf-dragons are another matter, of course. Dwarves respect anyone who can make a successful deal with a dragon, and they’re especially proud when it’s one of their own. Dwarves respect and admire soulmechs. They respect the craftsmanship of their robotic bodies and the resilience of the souls that animate them.

The dwarven people are scattered across the galaxy like the stars themselves. While there are dwarves on most major planets in the Dragon Empire, they usually prefer isolation to the hubbub of the great multicultural cities. They tend to populate planets on the outer edges of solar systems, as well as asteroids, space stations, and isolated colonies. Modern dwarves lean toward the engineering sciences. They are a people who like to build grand things—especially with machines—including cities, bridges, towers, and vast manufacturing complexes. To a dwarf, the most important things are his family and his clan. Much of dwarven society is based on these vital connections, and the largest clans are akin to interplanetary conglomerates in both scope and power. The dwarven people are suspicious of outsiders. They tend to extend their trust by degree of relation. The scale goes like this: family members, clan members, other dwarves, everyone else—and then orcs.

Most modern dwarves worship the Smith, the great tool maker and master craftsman. There are a few dwarf Dualists who worship the Creator, although these dwarves are often derided by their peers for following a religion that fills its temples with members of the short-lived races.

Environmental resistance (poor atmosphere) (+1): Dwarves’ great constitution allows them to better withstand the effects of a poor atmosphere with little oxygen. They receive a + 4 to resist the effects of being in this adverse situation.
Low Light Vision (+1): Dwarven eyes are accustomed to the dark of the underearth. They ignore penalties for Dim and Dark lighting.
Racial Enemy (–1): Dwarves hold the orcs responsible for the destruction of the Dwarven Commonwealth in the Pre-Empire era. The devastation then was so horrible that it led to the Dwarven Diaspora still talked about to this day. Members of each culture suffer a –4 Charisma when dealing with each other. Unless fettered by other authorities or common goals, individuals of the two races typically attack each other on sight.
Slow (-1): Dwarves have a Pace of 5".
Tough as Old Boots (+2): Dwarves are stout and tough. They start with a d6 Vigor instead of a d4. Additionally, dwarves get a + 2 to any Vigor roll that involves resisting poison effects.