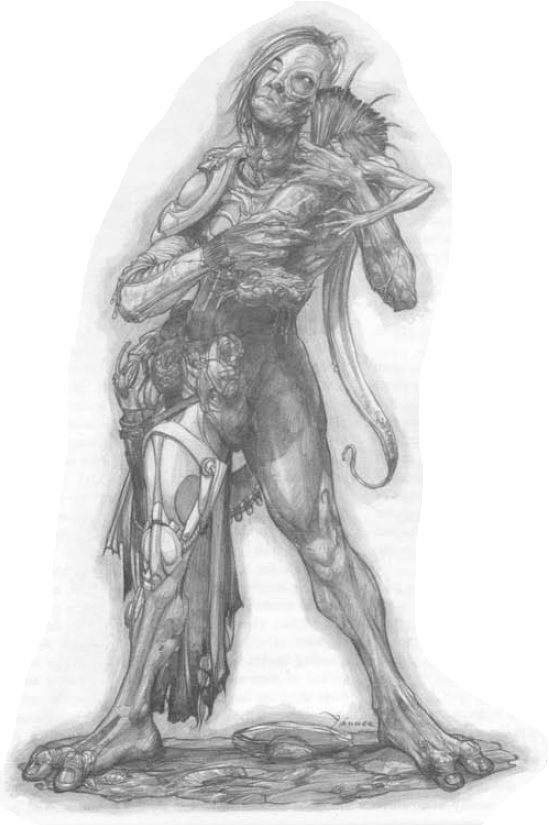 Mysterious and solitary, this offshoot of the doppelganger race is little more than an enigma to most of the Dragon Empire. Doppels have no homeworld to speak of – indeed, they have no cities, tribes, or organizations either. They are typically loners and mercenaries, selling their services to the highest bidder. Known for their calculating nature and the ability to stay eerily calm in even the most dangerous of situations, their very name sends a chill down the spines of the average Empire citizen. As far as most in the Empire are concerned, a dopple is an ominous threat able to change its face at will.

Typically, a doppel adopts an assumed identity when settling on a new world. The identity is chosen to blend in easily – if living on a predominantly elven world, that identity would be that of an elf. This is the identity that the doppel presents to the outside world. They rarely, if ever, present their true appearance to anyone except those they absolutely trust. Doppels lack a unique culture, and as such, have never developed any customs or history of note. Instead, they are content to adopt the ways of those they observe, adding new dimensions and little touches to their non-doppel identities with the information so gained.

Because their natural abilities lend themselves perfectly towards the art of deception, most doppels are involved with the criminal element in one form or other. Many are swindlers and thieves, using their abilities to assume the identities of others in elaborate con games. Others are spies and law enforcement agents, using their shapeshifting abilities to infiltrate criminal organizations with ease. Regardless o their motivations, however, doppels rarely take pleasure in the end result of their activities, whether stealing priceless gems from the Empire or exposing a traitorous legion to the authorities. Rather, they find pleasure in the act of deception itself – the goal of their deception is merely a formality.

Doppels are incredibly interested in technology, though not necessarily adept with it. This is because they realize that technology can be used to enhance their ability to change identities. Any sort of device that provides access to identity databases or that can enhance a disguise is instantly a valuable commodity to a doppel. For this reason, doppels constantly seek to establish friendships or alliances with hackers and other rogue programming geniuses – an individual who can create a new identity with a simple keystroke is a doppel’s fondest dream. Normally, doppels have very little regard for money or material goods. They do hoard information, however, and will pay large amounts of money to acquire even the tiniest scraps of information. Most doppels believe that pure information is far more valuable than any other sort of commodity in the Dragon Empire.

Doppels tend to be reserved individuals, rarely initiating conversatio or conflict, preferring instead to react to the actions and behaviors of others. They also prefer to remain forgetful to casual observers, so they try not to exhibit any memorable behaviors or speech patterns.

Doppels are born liars. Changing appearances and identities invariably lead to changing stories, and doppels are masters at telling blatant lies with a perfectly straight face. They have a remarkable memory for keeping track of what lies they’ve told to whom, and for blending stories they’ve read or heard into the background of their assumed identities in order to make those identities more believable. Empire psychologists have noted that the doppels’ penchant for lying is somewhat pathological in nature – even when given an opportunity to simply speak the truth, doppels can rarely do so without some form of embellishment.

Though doppels are generally passive observers, they are fierce fighters when actually forced into combat. In particular, they often choose to initiate combat if they believe an identity of theirs is about to be unnecessarily exposed – doppels are extremely protective of what they choose to reveal to others, and someone who exposes a doppel without permission will certainly be marked for retribution.

In their natural form, doppels are slender humanoids generally no taller than six feet in height. Despite their slim and often frail-looking appearance, though, they are very hardy individuals. Doppels possess pale, oily skin that is rough to the touch. Doppels have long, drawn faces, whitish eyes that lack pupils and small, expressionless mouths. While they can move quickly if they have to, doppels typically move with slow, deliberate purpose.

In their assumed forms, a doppel can be just about any humanoid form, ranging anywhere from four to eight feet in height and anywhere from half to double their normal body mass. They can also easily take the appearance of a humanoid of the opposite sex. While doppels can assume virtually a limitless number of humanoid forms, they usually have one or two favorite forms that they use when interacting with non-doppels. These forms also tend to have well-crafted identities and backgrounds that are constantly developed by the shapeshifters.

Doppels tend to possess an immense variety of clothing, all tailored for the various forms that they assume most frequently. However, the style of clothing chosen by the shapeshifters is normally quite bland, and tailored towards letting a doppel blend into a crowd. Doppels prefer to avoid clothing and possessions that may be memorable to observers.

The races of the Dragon Empire almost universally fear and despise doppels. Most creatures know little about the shapeshifters, but believe that they can change their appearance at will and are often involved in sinister activities. This general concern regarding doppels led to the Doppel Registration Decree in some regions – a law requiring that all doppels register their residence and identities with the Imperial Special Police Directorate. Doppels convicted of fraud or any other sort of deceptive crime also face more severe sentences in these parts of the Imperial justice system. However, this decree, while meant to control fears and possible threats involving doppels, has instead caused doppel resentment towards the Empire for infringing on their anonymity. It has also increased fear of the shapeshifting doppels, as many believe that the ISPD is gathering their personal information not to monitor the doppels, but to recruit them. Regardless of an individual doppel’s real personality or intentions, the average Empire citizen’s initial reaction to any doppel is likely to be mistrustful.

Doppels deal best with humanity and with the drow. Humans, while not entirely trusting of the doppels’ motives, are usually open-minded enough to believe that not all doppels are face-changing, shadowy assassins. Drow, on the other hand, deal with doppels whenever possible precisely because they hope that the doppels are the elusive killers of Empire legend. The other races of the Dragon Empire typically try to have as little involvement as possible with doppels. Dwarves, in particular, loathe the shapeshifters with a passion, and will go out of their way to expose or destroy any creature they suspect of being a doppel – the deceptive nature of the doppel is in complete opposition to the dwarves’ blunt and direct approach to others. Doppels normally try to avoid contact with dwarves whenever possible, and tend not to utilize dwarven forms or identities unless absolutely necessary.

Doppels change their name the way other races change clothing. To a doppel, having a name isn’t important – it’s just a label for others to use.

Charismatic (+2): Shapeshifters quickly learn to navigate tricky conversations to fit in with new communities. They gain the Charisma Edge for free.
Change Shape (+2): Shapeshifters have the Arcane Background (Gifted) Edge. As a limited free action, they may change their physical appearance as per the disguise power (FCa p. 108) with the Personal Limitation and extending the base Duration to one day.
Deceptive (+1): + 2 bonus to Persuasion and Notice rolls when attempting to deceive and sense motives respectively.
Delicate (-2): Doppels lack the muscles of other races. All Strength rolls (including damage for Strength, but not linked skills) suffer a –1 penalty.
Low Light Vision (+1): Having originally evolved underground, doppel eyes are accustomed to the dark of the underearth. They ignore penalties for Dim and Dark lighting (but not Pitch Darkness).
Secret (-2): shapeshifter’s true nature is rarely known—even to other shapeshifters. They keep their ability close to the chest, granting them the Secret (Major) Hindrance. Should they ever be discovered by anyone other than their closest allies, they trade this Hindrance for Enemy, Shamed, Wanted, Outsider, or another appropriate Hindrance.