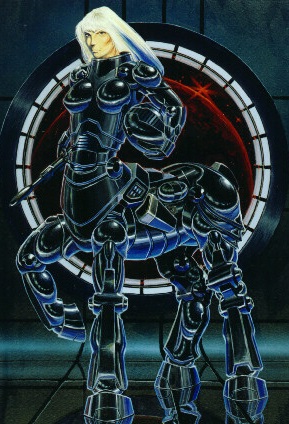 Centaurs are fiercely independent creatures who have a deep mistrust of most other races. The only exceptions to this are the elves, who have slowly managed to draw the centaur race from their secluded existence into the modern day Dragon Empire. For the most part, centaurs are wild creatures that love their primitive existence; however, a few outspoken individuals have begun to embrace technology and the more modern style of living found throughout the Empire. Centaurs are generally viewed by others as a primitive, savage race that is finally taking its first reluctant steps into the modern age.

Centaurs tend to live along the fringes of the Dragon Empire, close to the worlds of the Outlands. Nearly all the worlds that centaurs live on also have high elven populations. Centaurs have very tight-knit communities that can be found in the wilderness of their homeworlds, far from the cities and civilizations of other races. It is rare – but not impossible – to find a centaur living in an urban setting, or living in an area not predominantly populated by other centaurs. They cherish their traditions and customs, and often believe that extended contact with other cultures may dilute the culture that they have developed. This is one of many reasons why centaurs are so reluctant to deal extensively with the other races of the Empire.

Centaurs have a passionate kinship to nature and the wilderness. This is another reason why most centaurs prefer to remain among the more wild areas of a planet, where high technology is a rarity. Even the most adventurous of centaurs tend to dislike the cities of the Dragon Empire, and attempt to avoid being confined inside buildings, starships, or other manmade structures whenever possible. For this reason, centaurs that choose to leave the safety of their own settlements usually make their way to the Outlands where they can explore the unknown reaches of new colony worlds. The Outlands has become the place where most races first encounter centaurs. Because of the race’s wilderness skills, the demand for centaur guides, explorers, scouts, and soldiers is quite high. In fact, their prowess has led the Dragon Empire to recently establish a special branch of the Royal Exploratory Service called the Imperial Expeditionary Taskforce. The IET specializes in exploring and surveying forested worlds. Primarily headed up by elves and centaurs, the formation of the IET has contributed tremendously towards the urbanization of this shy race.

Centaurs tend to either love or hate technological devices. Most centaurs love to speak at great lengths bout the evils of science and technology. Over time, they’ve become convinced that such artificial aids are unnecessary and even harmful to leading a happy life. However, those centaurs who can be convinced to try technological devices tend to become obsessed with them. They have a special love of devices that can be wielded in combat or for tracking and exploring. However, even the most insignificant or useless gadget in the galaxy is of great interest to these centaurs – once the doorway to high-tech items has been opened, a centaur rarely turns away from it.

Barter Economy (-1): Money is still an alien concept for centaurs. Within their own sylvan communities, they make use of the same bartering system that they’ve had for thousands of years. Centaurs have a hard time understanding the concept of monetary value, a flaw that has given them the reputation of being “easy marks” with criminals.
Big as a … (+2): The humanoid part of a centaur is thick, stocky, and roughly man-sized, while the rear body is the size of a large work horse. This gives them a Size of + 2 and adds + 2 to their Toughness. This also makes them a large creature, and are somewhat easier to hit. Attackers may add + 2 to any attack rolls directed at them.
Gallop (+2): Centaurs begin with a Pace of 8 and roll a d8 when running instead of a d6.
Luddite Lifestyle (-2): For the most part, centaurs are wild creatures that love their primitive existence, only reluctantly beginning to embrace technology and the more modern style of living found throughout the Empire. This makes using computers and other devices of high tech level tricky, and they suffer – 4 when doing so. (Note: This is different than All Thumbs - the character isn’t technology averse, he’s just used to a more primitive tech level.)
Mistrusting (-1): Centaurs have a deep mistrust of the other races, and are not willing to offer their trust on blind faith. The only exception to this are the elves, with whom the centaurs have long held good contact. As a result, when dealing with races other than elves, they subtract 2 from their Charisma.
Strong (+3): Centaurs begin with a d8 in Strength and may raise it to a d12 + 2 via normal advancement; the Professional and Expert Edges may raise it to a d12 + 4.
Unusual Body Type (-1): Because of their uncommon physiology, centaurs seldom find clothing or armor that will fit them. Typically, they must have such items made. Because they are a large, non-humanoid race, such items cost four times as much as normal, and they are twice as heavy.