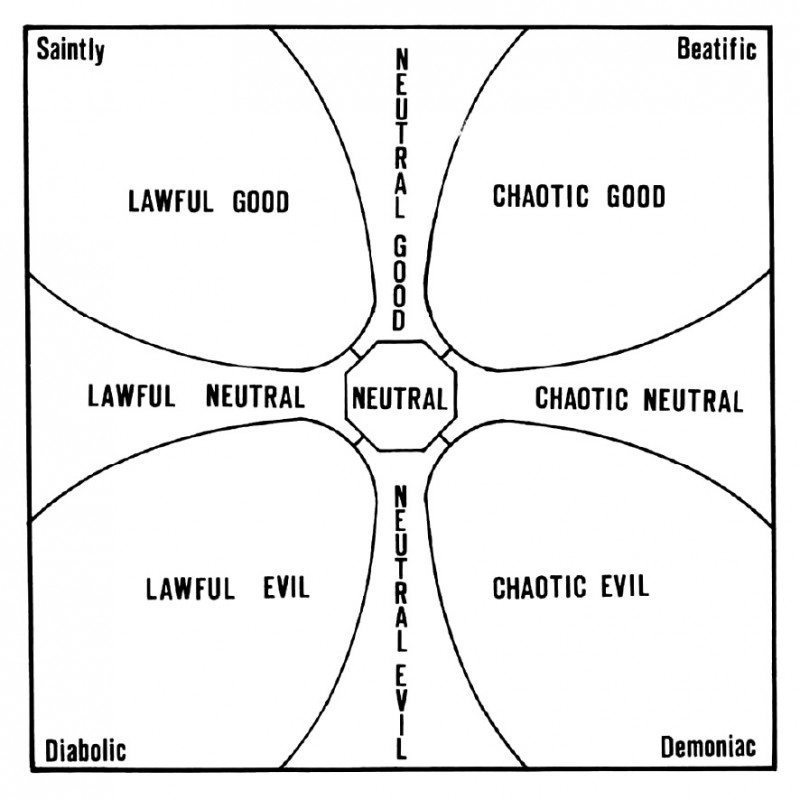 Alignment is one of the most iconic tropes of D&D, present from even the earliest edition. While Savage Worlds does not have a mechanic for alignments, nor, in fact, a character class system that would make such a mechanic relevant, there is still a place for alignments in Motes in the Serpent’s Eye.

The Dragon Empire has one particularly relevant tenet emphasized by every court and every institution within its domain. It is called the principle of active morality, and what it means is that people are to be judged by what they do, not what is in their hearts. There are all sorts of spells, both divine and arcane, that can discern whether someone is evil or good, inclined to follow the rules or to wreak havoc. The principle of active morality says that you can’t hold someone’s inclinations against them. The only thing that matters, as far as the law is concerned, is what someone does.

With this in mind, alignments can be used to help you define your character. While you are in no way required to declare an alignment for your character, should you choose to do so, or even merely keep one in mind when designing their personality, here are some guidelines for appropriate Hindrances and Edges that can help you emulate an alignment. Even an appropriately worded Loyalty, Vow or Quirk can assist in re-enforcing this aspect of your character.

Law
Lawful people respect authority, dislike lying, and strongly avoid crime. Any Lawful character should have the Code of Honor Hindrance and may not be Berserk. He will have trouble with the Bloodthirsty, Major Greedy, or Major Vengefulness Hindrances in societies where killing is a crime (as is usual). If a Lawful character were Wanted, he would at least consider turning himself in, depending on what authorities were involved.

Chaos
A Chaotic character wants freedom to act in any situation. He may not have Code of Honor or Cautious, and will do well to avoid Vows other than those required by their profession.

Good
Good people value everyone’s life and the golden rule. A truly Good character should have at least one of Heroic, Loyal, or Pacifist as a Hindrance, and may not have Bloodthirsty, Major Greed, or Major Vengefulness, since they require a willingness to kill merely for one’s own convenience.

Evil
Evil people are ruthless. They consider that might makes right and that the ends justify any necessary means. An Evil character may not be Heroic or Pacifist, and may expect to suffer Charisma penalties from ordinary, peace-loving folk if his evil deeds become known. Major Greed and Vengefulness are appropriate options.

Neutrality
People whose choose to be Neutral between Law and Chaos tend not to have Code of Honor. People who are Neutral between Good and Evil do not have Heroic or Major Greed, and seldom take Bloodthirsty or Major Vengefulness.

Evil Acts
In addition to murder and torture, it is considered Evil to use poison, attack the helpless, or create undead.

Alignment Behavior
The GM is free to award or take away bennies based solely on her idea of alignment-appropriate behavior. Some professions or magical abilities have alignment requirements as well, and characters who violate them can lose abilities as a result, temporarily or permanently.