Hindrances:
Light Sensitivity (Racial, Minor) – Millenia of underground life has left Dark Elves more adapted to the darkness of the underground than surface conditions. Dark Elves suffer a –4 penalty to resist effects involving bright light and to Notice checks when exposed to bright light without eye protection.
Mercy is No Virtue (Racial, Major) – Dark Elves do not take prisoners and do not hesitate to resort to horrific means to extract information from their enemies. Dark Elves suffer a -4 Charisma penalty with those who know and do not support their murderous ways.
Racial Enemy (Racial, Major) – Dark elves reserve a special hatred for their surface kin. Few drow can let an opportunity to inflict misery on a elf slip away. Members of each culture suffer a – 4 Charisma when dealing with each other. Unless fettered by other authorities or common goals, individuals of the two races typically attack each other on sight.
Waning Essence (Racial, Major) – Milennia away from the light of any sun have sapped the Dark Elves’ health. Vigor requires two points per step to raise during character generation.
Bullet Magnet (Major) – The character has the unfortunate tendency to be in the wrong place at the wrong time. The character is hit by adjacent fire (using Innocent Bystander rules) on a 1-2 for single shot weapons and 1-3 for shotguns or full-auto fire.
Enemy (Minor) – Foster Brother Yondel Kirran
Wanted (Minor) – Excessive destruction of property and possession of illegal weapons on some backwater speck in the universe

Edges:
Agile (Racial) – Dark Elves are graceful and agile. They start with a d6 in Agility instead of a d4.
Fair fights are for Fools (Racial) – Dark Elves strike from the shadows or wherever they hold the advantage. Whenever they strike an opponent who is unaware, whether by blade, bow or spell, they add + 2 to the damage roll.
Life in the Shadows (Racial) – Dark Elves live, fight, run and die in the shadows. As a result all Dark Elves begin with a free d6 in Stealth.
Low Light Vision (Racial) – Generations of living underground and in the shadows have given the Dark Elves the ability to see with clarity in the darkest places. They ignore penalties for Dim and Dark lighting.
Magic Resistance (Racial) – Dark Elves are particularly resistant to magic (including psionics, weird science, etc.). They act as if they had 2 points of Armor when hit by damage-causing arcane powers, and add + 2 to their Trait rolls when resisting opposed powers.
Tenebrous Daydreams (Racial) – Dark Elves do not sleep, entering a trance-like state of memory instead. They need half the normal amount of ‘sleep’ as humans. This ability also grants them immunity to all magical sleep effects and + 2 to any Trait rolls to resist any magical effect of the enchantment school.
Filthy Rich (Background) – This fortunate individual is very wealthy. He has five times the starting funds for the setting during character creation and, if appropriate, a yearly income after responsibilities of around $500,000. Even wealthier characters may exist, but unless there’s a game effect it probably shouldn’t matter. This should be worked out with the GM and come with many more assets as well as onerous responsibilities.
Thief (Professional) – Thieves specialize in deceit, treachery, and acrobatics. They can be invaluable where traps must be detected, walls must be climbed, and locks must be picked. Thieves know how to use protrusions on walls and window ledges to climb the tallest of buildings, scampering through streets and back alleys like cats. They add +1 to Athletics rolls made to climb in urban areas. Thieves also know how to use the dark areas between the streetlights of cities to conceal their movements, and add +1 to Stealth rolls when in an urban environment. Finally, these rogues are—not surprisingly— adept at Thievery itself, adding +1 to those rolls in all circumstances.
Woodsman (Professional) – Woodsmen are rangers, scouts, and hunters who are more at home in the wilderness than in urban areas. They are skilled trackers and scouts, and know how to live off the land for months at a time. Woodsmen add +2 to Survival rolls, and Stealth rolls made in the wild (not towns, ruins, or underground).
Jack-of-All-Trades (Professional) – Through advanced schooling, book-learning, computer-enhanced skill programs, or just amazing intuitive perception, your hero has a talent for picking up skills on the fly. There’s little he can’t figure out given a little time and a dash of luck. The character makes a Smarts roll as an action after observing or studying some subject. She gains a d4 in the relevant skill with success, or d6 with a raise. She may try again after an hour of study, trial and effort, or immersion if she fails or wants to try for a raise. This lasts until the character attempts to learn a different subject, whether she’s successful or not.
Cyber Tolerant (Background) The individual’s body can handle cyberware better than most. His Maximum Strain for cyberware is increased by +4.
Dead Shot (Combat) – When your Action Card is a Joker, double the total damage of your first successful Athletics (throwing) or Shooting roll this round.
Level Headed (Combat) – Fighters who can keep their cool when everyone else is running for cover make deadly combatants. A hero with this Edge draws an additional Action Card in combat and chooses which to use.
Improved Level Headed (Combat) – As above but the hero draws two additional cards and chooses which to keep.
Nightblade (Spellcaster) – You can cast 3 Novice spells per day. If you are a Spontaneous Spellcaster, you know 4 Novice spells of your choice, otherwise you have access to the full Nightblade spell list. Your caster rank is Novice when casting Nightblade spells, or Seasoned if you also have Sneak Attack.
Nightblade, Improved (Spellcaster) – You can now cast 3 Novice and 3 Seasoned spells per day. If you are a Spontaneous Spellcaster, you also know 4 Seasoned spells of your choice, otherwise you have access to the full Nightblade spell list. Your caster rank is Seasoned when casting Nightblade spells, or Veteran if you also have Sneak Attack.
Sneak Attack (Combat) – Whenever you have the Drop or Surprise against a foe, you inflict an additional +2 damage; otherwise, you may instead add half of your Gang Up bonus to your damage roll, rounding fractions up.

Spells:
Novice Spells – Empathic Linguist (Divination), Feather Fall (Transmutation), Glamour (Illusion), Spider Climb (Transmutation)
Seasoned Spells – Invisibility, Combat (Illusion), Keen Blade (Transmutation), Minor Teleport (Conjuration), Swiftness (Transmutation)
Perpetual Spells -
Sense Invisibility (Divination) This spell grants you the ability to perceive invisible creatures and objects as translucent shapes. It also reveals ethereal creatures and objects, but not illusions or other sources of obscurement. You can distinguish between visible, invisible and ethereal, but not to the method used to become invisible.
Arcane Vision (Divination) This spell causes your eyes to glow with a faint light, enabling you to see magical auras within 24". You can automatically sense the location and power of all magical auras within range, and can make a Knowledge (Arcana) roll at –2 as a normal action to determine the school of magic for a specific aura. If you concentrate on a specific creature or object as a normal action, you can automatically determine whether they have any magical powers, as well as the strength of the most powerful spell or spell–like ability they can currently use.

Ditak Kirrin was a foster child to orc mercenary Laq’Grok Kirrin. His derro foster brother Yondel Kirrin (who is now his enemy hindrance) was adopted at the same time. Laq’Grok trained both of them as snipers and they would alternate the positions of spotter and sniper. Yondel also has the bullet magnet hindrance and admittedly anyone who saw a drow or derro would subconsciously adjust their aim towards them. Both have come to realize that any bullet aimed at the spotter would somehow find its way to hit the sniper and vice versa. They continued to work together as a pair after Laq’Grok’s death until one day when Ditak realized that the the derro had finally snapped and was about to kill him. At that same instant Yondel realized that the drow had finally snapped and was about to kill him. Their entire safe house as well as most of the surrounding block was destroyed in the firefight. Sometime after making his safe getaway Ditak was contacted by a former associate of his father offering him a lucrative position within the ISPD. 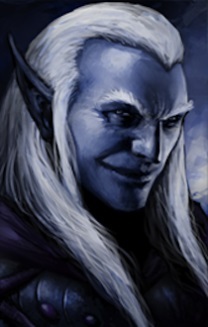