A bio-anthropologist from the University of Meneer.

Hindrances:
Darkness Sensitivity (Racial, Minor) – Due to their dependency upon sunlight, Sathoni suffer a -2 to all trait tests when in complete darkness. Note this is less due to vision as it is caused by energy levels, so this penalty is in addition to any other penalty caused by darkness.
Environmental Weakness, Heat/Fire (Racial, Major) – Sathoni suffer + 4 damage from heat or fire attacks, and a – 4 penalty to resist any other effects.
Inflexible (Racial, Major) – Due to their tough skin, Sathoni gain a + 1 to their Toughness, but suffer a –1 penalty to all Agility trait rolls.
Light Dependency (Racial, Major) – Sathoni produce their energy through photosynthesis and are dependent upon sunlight, or a similar source of light (the internal lighting aboard most starships is sufficient), in addition to water and minerals to make their own food. A Sathoni character must bask in sunlight (artificial or otherwise) once per day or suffer Fatigue. This can lead to death. Fatigue is recovered at the rate of one level per hour of sunshine.
Curious (Major) – It killed the cat, and it might kill your hero as well. Curious characters are easily dragged into any adventure. They have to check out everything and always want to know what’s behind a potential mystery.
Phobia (Minor) Large Herbivores – Phobias are overwhelming and irrational fears that stay with a hero for the rest of his life. Whenever a character is in the presence of his phobia, he subtracts 2 from all his Trait tests as a Minor Hindrance, and 4 if the fear is a Major Phobia.
Quirk (Minor) Nudist – Your hero has some minor foible that is usually humorous,
but can occasionally cause him trouble.

Edges:
Hardy (Racial) – A second Shaken result on a Sathoni doesn’t cause a wound.
Plant Affinity (Racial) – A Sathoni character can cast Speak with Plants (per SVM 138) as if they were a Seasoned caster for the cost of one benny.
Plant Creature (Racial) – Sathoni are plants rather than animals and, like other plants, are immune to poison, sleep, paralysis, polymorphing or other effects that specifically target humanoid creatures. What vital organs they have are redundant or distributed, so called shots do no extra damage against them.
Regeneration (Racial) – Sathoni regenerate quickly. As long as they’re not Exhausted from lack of sunlight, they may make a natural Healing roll once per day (rather than once per week). They can even regrow parts of their body mass or instantly reattach a severed portion.
Attractive (Background) – It’s no secret that beautiful people have an easier time getting their way in life. This Edge grants your beautiful or handsome character + 2 to Charisma.
Very Attractive (Background) – Your hero is drop-dead gorgeous. His Charisma is increased to + 4.
Scholar (Bio-anthropology, Biology) – Learned professors, devoted students, and amateur enthusiasts spend months of their lives studying particular subjects. They become experts in these fields, and rarely fail to answer questions in their particular area of expertise. Pick any two Knowledge skills the Scholar has a d8 or better in. Add 2 to your total whenever these skills are used.
Novice Druid (Spellcaster) – You are able to prepare and cast 2 Novice spells and 4 Cantrips per day. Your caster rank is Novice when casting Druid spells.
Seasoned Druid (Spellcaster) – You are now able to prepare and cast 2 Seasoned spells and 4 spells of each lower rank per day. Your caster rank is now Seasoned when casting Druid spells.
Charismatic (Social) – Your hero has learned how to work with others, even those who might be somewhat opposed to him or his efforts. This adds 2 to his Charisma.
Natural Casting (Spellcaster) – You are able to cast spells that require gestures and incantations while shapechanged into the form of an animal, using growls, claw gestures, etc.
Common Bond Social) – A character with this Edge may freely give his Bennies to any other Wild Card he can communicate with. This represents the character giving his verbal or spiritual support to the ally. The player should say what his character is doing to give the support. The gesture could be as complex as a rousing speech, or as simple as a knowing nod.

Spells Prepared:
On Ship vs (On Planet)

Dr. Eon Rose is a bright and rising star in the field of Bio-anthropology, an instructor at the University of Meneer. A young Sathoni whose seed-ship clan specialized in terraforming, and a devout follower of both druidical doctrine and the Magi, Dr Rose brings a fresh and somewhat controversial perspective to her chosen field of research.

In early 5038 IE, she published a paper on a radical hypothesis pertaining to the origin of sentient species that draws from both church canon and modern genetic knowledge. This paper has been received with much controversy in academic, secular, and religious circles, and continues to spark lively debate. 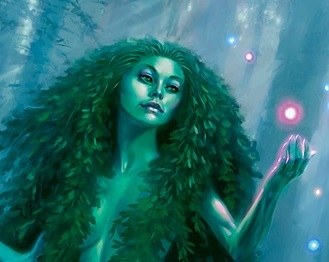