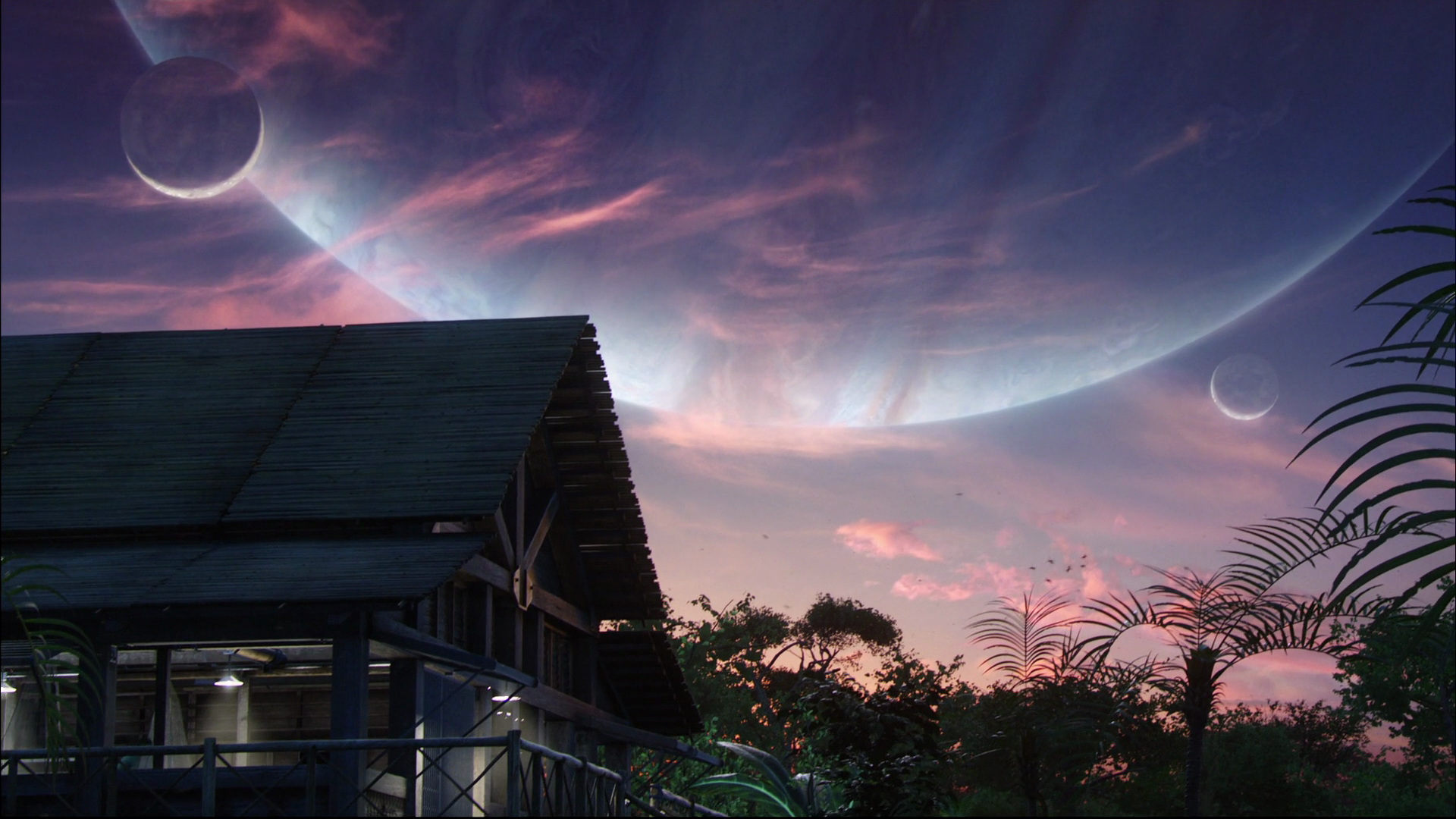 Session picks up immediately after the events of prior ep

After finishing our business on Monschrome, we decided to go to Almer Station. Pei’Fa obtained some coordinates and we set out for the Tarnahan System. Our arrival caused a stir, and several vessels decided to leave immediately. After some debate regarding our welcome, we decided to leave and go to Haven instead. Haven is a forest moon settled by a colony of agrarian gnomes.

Shortly after arriving in-system, we were hailed by Jaeger172. After a short conversation with the night shift manager, a gnome called Galvemore Deg, he went to awaken the mayor and we continued our approach. We attempted a scan, and determined that we were on course to land at the largest of fourteen settlements on the moon. The total population seemed to be around 250,000 humanoids, which was much larger than expected. We picked up electrical power, and some fairly modern technology. They had an older satellite network, and quite a bit of debris, possibly from a collision.

When we were still about 90 minutes out, we received a call from The Right Honorable Tras Jievrarnfor, the Mayor of Haven Prime. He expressed concern that we could be pirates, so we both agreed to turn on our video feed. The mayor was in a crowded room, filled with gnomes, halflings, and half elves. We eventually reached an accommodation. We would be allowed to land, and they would offer us breakfast in the morning, based on their local time.
Once we hit orbit, we tried another scan. This one revealed that the colony is having maintenance issues. There was only one manufacturing facility, and it was not in operation. Their only defenses were old anti-ship batteries which were also not operational. They did have a good sensor array.

We decided that they had been attacked by pirates, and were struggling, so planned to be generous with our trade goods. Once the agreed upon time arrived, we exited the ship with a care package filled with a variety of treats, including Scotch, coffee, strawberry jam, pershalan cloth, and mustard. The mayor rode up on a trike. He greeted us and escorted us down the main avenue from the starport to the town, where we entered the town hall. They had a band to welcome us, and cooked an elaborate breakfast. However, we did notice that no one was out of their homes to gawk at us, and that was unusual for a remote colony.

After our meal, Samai and Elly left to go to the ladies’ room, and their Chief of Security, a consultant named Zed Lassiter also left. A troop of children entered the hall and prepared to sing for us, just as Zed returned. His arrival was evidently a signal, because some of the servers pulled guns from under their robes and turned them on the children. More men crashed into the hall, shooting at us. Immediately, the mayor and Keystone were hit by multiple projectiles. They both went down, and the Captain collapsed from poison.
The crew managed to overcome the attackers in the room, and prevent harm from coming to the children. Zanven Greensleeves, in particular, acted courageously in defense of the youngsters, and should receive a commendation. The science team busied themselves with healing those injured in the initial attack, while the rest continued to fend off new attackers entering the hall.

Lady Kotonaru was able to dominate the weaker minded Zed Lassiter, and ordered him to tell his men to surrender. She discovered while quickly questioning him, that the greater force was attacking the Speaks Softly. A group of pirates, banded together for mutual profit, had taken Haven as their base. There were at least 400 troops on the moon, with two cloaked ships. Three (four?) additional ships were in orbit above the planet, ready to offer support. In command on the ground is a half-dragon calling himself Sir Gracious. In command of the pirate fleet were three Captains: Funny, Blackhate and Dyn’eldi. Pei’Fa and I held the doors while the crew cleared the room, and were able to spot the transport the troops we were fighting used to deploy here in town.

Meanwhile, on the Speaks, the pirates used an EMP warhead from a missile to disable the ship systems. This had the unfortunate side effect of disabling Durendal as well. Kirran went to fight off intruders who were trying to force their way into the ship, while Ereyie guarded the bridge. Keriwar went to engineering to try to get the ship back online.

Experience is what you get when you didn’t get what you wanted.

Well, I fucked up. I misread the situation completely. There’s no excuse…I should have seen the signs and recognized them. I would have if I hadn’t been trying so hard to impress the Captain. That just goes to show, the minute you think you might want something,
everything goes to shit. We should’ve just gone to Almer Station after all. Yeah, yeah, they might have blown us into the void, but they might’ve let us dock.

Instead, we decided that discretion being the better part of valor, we’d sod off and visit the farmer gnomes instead. What could go wrong there, we said? It’ll be fun, we said. Famous last fucking words.

We got to the system and the moon was just where it was supposed to be. That moon had fourteen settlements, and about 250,000 people living on it. We got a hail from Galvemore Deg, the night manager for the port. He was freaking out, and obviously scared. The Captain was reading a novel on the bridge (in other words, listening closely to how I handled the situation while pretending to ignore me) and left everything to me to arrange. It made me nervous as hell. It would have been better if he’d loomed behind me. At least then I could have been offended.

I decided something about the scene made me nervous, so Ereyie did a scan. There was a satellite, and a lot of debris, almost like there’d been a collision. Then we got a call from The Right Honorable Tras Jievrarnfor, the Mayor of Haven Prime. We were only ninety minutes out, and he was completely panicking. He accused us of being pirates, so we turned on our video feed, and so did they. They didn’t seem any calmer after seeing we weren’t pirates. I tried to make them feel better, but I don’t think it worked. I got Dr. Rose on the line too, and she tried to calm them down. We agreed that we would land, and wait until first light. Then they would serve us breakfast as a welcome.

The Captain asked me my take on the situation, and dammit, I ignored my gut. Something wasn’t right, and we all knew it, but we thought they had been hit by pirates before and were scared. Plus, I saw some symbols of the Creator when they turned on the video. We speculated that they were victims of religious persecution. The Captain ordered us to take the worst end of any trade, since they were clearly struggling.

When we got into orbit, we did another scan and found the colony was having maintenance problems. The only thing obviously working was the sensor array. Again, this all made sense based on the evidence we had. I’m not trying to justify my lack of judgement, but explaining why no one else caught on.

The mayor rode his trike out to greet us. He came alone, which was odd, and led us back to the town hall. We saw people peeking out of windows as we passed, but no one was on the streets. When we got to the hall, they brought out a band and played a song for us. The mayor introduced me to his security consultant, a Mr. Zed Lassiter. Fucking prick.

Then they served breakfast, and it was awesome. We brought two-thirds of the crew, and everyone was really happy about it, because the food was excellent. When Samai and Elly went to the ladies’ room, it all went to shit. A bunch of kids came in to sing for us, and that’s when a bunch of the servers pulled guns from their robes. Pirates came smashing into the room. The Captain keeled over in his seat. That fucking yellow-bellied mayor poisoned him! Zed started yelling commands, and someone shot Doc Keystone.

Zanven turned invisible, and used that to take out the servers who had trained their weapons on the kids. Scrapnik started leading them out of the room and hopefully to safety. Koto used her domination spell to get control of Zed, but unfortunately he was only in command of the attackers in the room with us. Pei’Fa and I took the front door. There were a couple of ranks of pirates coming through the door. Pei’Fa used his freaky mental powers, and I used my breath weapon. It’s a nasty way to die but these assholes had it coming. It’s called “karma”, and it’s pronounced, “ha ha, fuck you”. Next the guy in the transport started firing a Gatling gun at us. So that was a thing that happened.

He missed by a mile, scaring the shit out of his own guys. Pei’Fa and I ducked back out of sight. Koto had been questioning Zed, and found out that the main part of their forces was attacking the Speaks! Their ground commander is a half-dragon calling himself Sir Gracious. He’s got two cloaked ships and 400 troops. There are another three ships in orbit around the planet. There are three captains in charge of this fleet: Funny, Blackhate and Dyn’eldi! By the Egg, the “L” in my luck’s been replaced with an “F”!

We had no idea what was happening back at the Speaks, the Captain and the Doc were out of the fight, although the science team kept them both alive, and Samai and Elly are missing. This whole planet is playing host to a pirate fleet. Because we’ve never seen this before…no idea what that looks like. This is a shitshow. Pei’Fa and I are taking that damn transport. We need an edge against 400 pirates.

Welcome to the Jungle (Finale) The Maxx