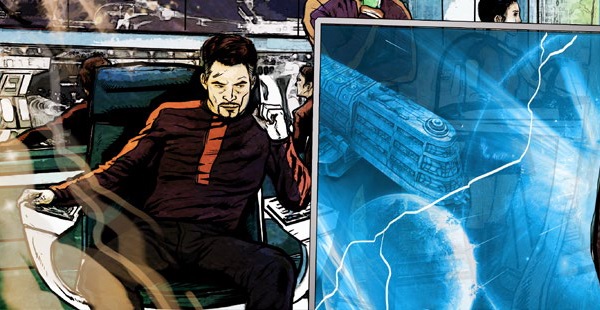 Captain’s Log; RES Speaks Softly, 5041.97:1920 I.E.; Captain Ni Shen Xau recording.
The Speaks Softly is now in her third week of a scheduled month long maintenance and refit layover at the Aelding Shipyards, her crew on extended leave for the time. While still swarming with engineers and technomancers, today I was finally able to take a brief tour and walk her decks for the first time in nearly two weeks. To my eye, there appears to be some deviation from the planned upgrades, but as my Chief Engineer isn’t due back until the day after tomorrow, I have put in a formal request to the yard management for updated specs. The new Starcaster and its linked astronav computer are in place and technicians are completing the final installation tomorrow. My inspection has been cut short, however, as I have finally received word from RESHQ in response to my queries regarding my crew disposition. I am to report to Headquarters on Meneer directly and in person. My maglev train on the Long Road departs within the hour, so I must exit with haste and leave the Speaks Softly in the capable hands of the shipyard once more. End entry.

Personal Log; 5041.98:0230 I.E.
I should have known something was up when they quartered me in the cloud city of Vespar for the duration of the refit rather than in Andrin Station. Rear Admiral Telzron Kimmuren met me himself at train station once I was on Meneer, escorting me to an RES flyer. The old bastard didn’t give up a hint the entire flight out to RESHQ, just chatted me up with small talk. At least he fed me before dropping the ball. Having been on four different throneworlds, experiencing as many different time zones, gravities and weather systems in less than three hours, my internal clock was completely baffled, communicating that confusion angrily to my stomach. Been a while since I’ve experienced Road Lag. After a surprisingly pleasant but uninformative meal he sequestered me in his office along with a very well dressed copper half-dragon, who, of course, got my name wrong. I like to think there was the ghost of a smile on the Rear Admiral’s face as I gently corrected the noble. Only after very politely inquiring after my health and the agree-ability of my abrupt trip from Aelding did Lord Angkar Quirin proceed to explain that the Speaks Softly has been ‘requisitioned’ for a special mission on behalf of his patron, a Lord verus sanguis of House Golion. My vessel and crew were to be at House Golion’s disposal rather than returning to normal RES service. Lord Quirin politely expressed his remorse over the inconvenience and assured me that the cooperation of the Royal Exploratory Service and myself would be noted and favorably weighed for future consideration. He then, again politely, excused himself and left the Rear Admiral to relate details and my orders. Telzron may be an old bastard with a reputation for unyielding propriety – but I have to admit his command of invectives is impressive. After he fumed a bit, not-so-candidly echoing my own feelings, he then laid it all out for me in as much detail as to which he’d been made privy. Basically, we’ve recruited to be a taxi. My Explorer Team – along with a sizable portion of my crew! – had been reassigned. They have been replaced with a purely civilian Science Team from the University of Meneer and ‘specially selected’ officers and crew. At least the Rear Admiral had put up enough of a fight that I have been permitted to retain a few officers and crew. I am grateful to him for that. I departed Meneer only a few hours after arriving with my encrypted orders on a datachip and only my pique for company on the long trip back to Aelding. I think that I’m going to crack open the minibar once I’m back at my aggravatingly opulent suite on Vespar. If I’m going to have to play errand boy for the scaly bastards, I’m going to run up their damned tab. They sure as Hell can afford it.

Personal Log; Supplemental.
I have a Gods-Damned Political Officer.